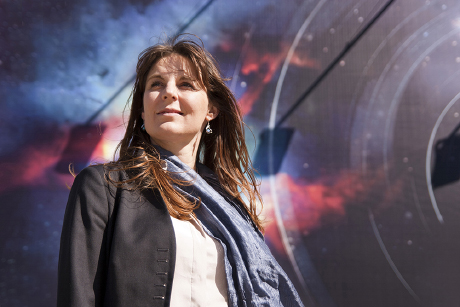 Elisabeth Schuh, Vienna
New faculty member, astronomer Lisa Kaltenegger - leader of a research group at the Max Planck Institute - will explore whether we are alone in the universe.

Astronomer Lisa Kaltenegger, leader of a research group at the Max Planck Institute, joins the faculty of Cornell’s astronomy department July 1 as an associate professor to work on a question that is thousands of years old – are we alone in the universe?

“The search for another ‘pale blue dot,’ which Carl Sagan influenced profoundly, is what makes it a great honor for me to work – and to walk a little bit in his footsteps – at the astronomy department of a great interdisciplinary university like Cornell,” Kaltenegger said.

Kaltenegger’s research focuses on the search and characterization of planets outside the solar system, so-called exoplanets.

“It is the first time in human history that we can look at the stars and not just wonder, but figure out whether there are other worlds like ours out there,” she said. “And the discoveries have been exciting and also surprising, from lava-worlds over mini-Neptunes to planets orbiting two suns and maybe the first other habitable planet.”

Her models bring together data from stars, as well as from Earth’s meteorology, geology, volcanology, biology and history, to determine how our planet would have looked billions of years ago using a technique called spectral analysis, which generates a spectral fingerprint of light for a planet.

“We’ve explored how Earth’s spectral fingerprint looked through its geological evolutions, from a younger to an older Earth,” Kaltenegger said. “And we can use that as an ‘alien ID chart’ for planets around other stars.”

Using advanced computer models, Kaltenegger and her team are generating a spectral database of light fingerprints for more than 100 alien worlds that potentially could harbor different kinds of life forms – based on extremophiles, organisms that live in extreme environments on Earth.

She was a postdoctoral fellow at the Harvard-Smithsonian Center for Astrophysics (CfA) and a research associate and lecturer in Harvard’s astronomy department.

“Lisa is a dynamic researcher who is a leader modeling the ‘signatures’ of Earth-like worlds orbiting around other stars,” said Terry Herter, chair of Cornell’s astronomy department.

Among her numerous awards are Salzburg’s Christian-Doppler Prize for 2013, the Paul Hertelendy Prize for Outstanding Young Scientists at the CfA for 2007, the America’s Young Innovator in Arts and Science Award from Smithsonian Magazine in 2007 and the Heinz Maier-Leibnitz Prize for Physics in Germany for 2012.

In fall 2013, she was named one of the investigators of the Simons Collaboration on the Origins of Life, receiving a $1 million award from the Simons Foundation, based in New York City.

The collaboration brings together researchers from fields as far apart as astrophysics and molecular biology to tackle questions as diverse as those about the astronomical context of the emergence of life on Earth and the chemical processes that produced the first self-replicating protocells (collections of lipids that are thought to perhaps be stepping-stones to the origin of life).

“We are basically now mapping the stars around us, like sailors did on their first journeys, but instead of ‘just’ discovering other continents, we are finding whole other worlds our there, fascinating and surprising,” Kaltenegger said. “Almost every other star out there has planets, providing a diverse set of other worlds to study. And these will allow us on the one hand to put ourselves into a cosmic context but also a first glimpse into a potential future of our own planet.”

Check out this video of Kaltenegger explaining the new Kepler exoplanet discoveries, and this one about the search for other Earths.