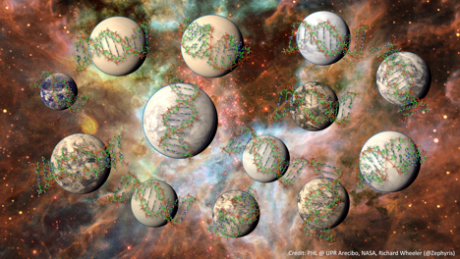 There are some 100 million other places in the Milky Way galaxy that could support complex life, report a group of university astronomers in the journal Challenges. They have developed a new computation method to examine data from planets orbiting other stars in the universe.

Their study provides the first quantitative estimate of the number of worlds in our galaxy that could harbor life above the microbial level.

“This study does not indicate that complex life exists on that many planets. We’re saying that there are planetary conditions that could support it. Origin of life questions are not addressed – only the conditions to support life,” according to the paper’s authors Alberto Fairén, Cornell research associate; Louis Irwin, University of Texas at El Paso (lead author); Abel Méndez, University of Puerto Rico at Arecibo; and Dirk Schulze-Makuch, Washington State University.

“Complex life doesn’t mean intelligent life – though it doesn’t rule it out or even animal life – but simply that organisms larger and more complex than microbes could exist in a number of different forms. For example, organisms that form stable food webs like those found in ecosystems on Earth,” the researchers explain in an auxiliary statement.

The scientists surveyed more than 1,000 planets and used a formula that considers planet density, temperature, substrate (liquid, solid or gas), chemistry, distance from its central star and age. From this information, they developed and computed the Biological Complexity Index (BCI).

The BCI calculation revealed that 1 to 2 percent of the planets showed a BCI rating higher than Europa, a moon of Jupiter thought to have a subsurface global ocean that may harbor forms of life. With about 10 billion stars in the Milky Way galaxy, the BCI yields 100 million plausible planets.

Despite the large number of planets that could harbor complex life, the Milky Way is so vast that planets with high BCI values are very far apart, according to the scientists. One of the closest and most promising extrasolar systems, called Gliese 581, has two planets with the apparent, possible capacity to host complex biospheres. The distance from Earth to Gliese 581 is about 20 light years.

“It seems highly unlikely that we are alone,” say the researchers. “We are likely so far away from life at our level of complexity that a meeting with such alien forms might be improbable for the foreseeable future.”

The research, “Assessing the Possibility of Biological Complexity on Other Worlds, With an Estimate of the Occurrence of Complex Life in the Milky Way Galaxy,” in Challenges, received no external funding.