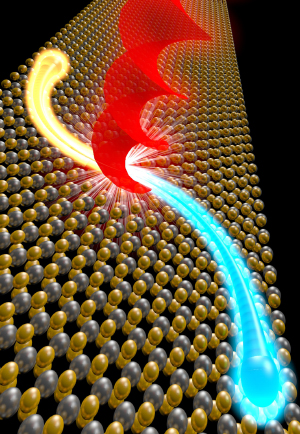 Kathryn McGill
Atoms of molybdenum (gray) and sulfur (yellow) are shown in a two-dimensional crystal formation. A laser hits the surface in a spiral, causing a valley current carried by an electron-hole pair, to move through the crystal.

For the ever-shrinking transistor, there may be a new game in town. Cornell researchers have demonstrated promising electronic performance from a semiconducting compound with properties that could prove a worthy companion to silicon.

New data on electronic properties of an atomically thin crystal of molybdenum disulfide are reported online in Science June 27 by Kin Fai Mak, a postdoctoral fellow at the Kavli Institute at Cornell for Nanoscale Science. His co-authors are Paul McEuen, the Goldwin Smith Professor of Physics; Jiwoong Park, associate professor of chemistry and chemical biology; and physics graduate student Kathryn McGill.

Recent interest in molybdenum disulfide for transistors has been inspired in part by similar studies on graphene – one atom-thick carbon in an atomic formation like chicken wire. Although super strong, really thin and an excellent conductor, graphene doesn’t allow for easy switching on and off of current, which is at the heart of what a transistor does.

Molybdenum disulfide, on the other hand, is easy to acquire, can be sliced into very thin crystals and has the needed band gap to make it a semiconductor. It possesses another potentially useful property: Besides both intrinsic charge and spin, it also has an extra degree of freedom called a valley, which can produce a perpendicular, chargeless current that does not dissipate any energy as it flows.

If that valley current could be harnessed – scientists are still working on that – the material could form the basis for a near-perfect, atomically thin transistor, which in principle would allow electronics to dissipate no heat, according to Mak.

The researchers showed the presence of this valley current in a molybdenum disulfide transistor they designed at the Cornell NanoScale Science and Technology Facility (CNF). Their experiments included illuminating the transistor with circularly polarized light, which had the unusual effect of exciting electrons into a sideways curve. These experiments bolstered the concept of using the valley degree of freedom as an information carrier for next-generation electronics or optoelectronics.

The paper is called “The Valley Hall Effect in MoS2 Transistors,” and the research was supported by the Kavli Institute at Cornell for Nanoscale Science, the Air Force Office of Scientific Research and the Cornell Center for Materials Research, which receives support from the National Science Foundation. CNF is also supported by the National Science Foundation.