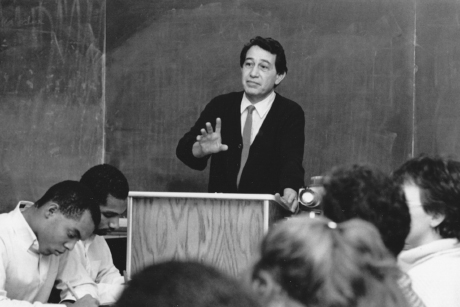 Provided
Stuart Stein in the classroom.

Professor emeritus of city and regional planning Stuart Stein, who as a planner and local legislator assisted in the creation of the Ithaca Commons and the TCAT bus service, died June 24. He was 84.

A specialist in land use and community planning, Stein joined the Cornell faculty in 1962 and taught until his retirement in 1993. He twice served as chair of the Department of City and Regional Planning.

Professor Emeritus John Reps, M.R.P. ’47, who was chair of the department when Stein was hired, credits former Architecture, Art and Planning dean Burnham Kelly for bringing Stein aboard.

“Our new dean at the time had Stu as a student at MIT and had followed his career as a consultant,” says Reps. “I would like to say that hiring Stu was my idea, but it was Burnham who rightly saw that we needed design strength, and Stu had earned degrees in both architecture and planning so he was the ideal fit.”

Stein was known for his strong commitment to putting planning decisions in broader context. “Cities are planned and designed to carry out social and economic functions,” he said. “That’s why I’ve always been more interested in neighborhoods, towns, villages and cities as opposed to regions or countries.”

While at Cornell, Stein began a deep involvement in the local community. In the late 1960s he was asked by the Ithaca City Planning Board to devise a way to save the city's decaying downtown. He and his colleagues developed a plan for what became the Ithaca Commons in 1974.

After his retirement from Cornell, Stein remained active in numerous elected and appointed positions, including chair of the New York State Board on Historic Preservation and of the Tompkins County Legislature. Longtime county legislator Barbara Mink says Stein was an important colleague.

“Stu was my mentor on the county legislature,” Mink says. “He was a spirited but gentle man, a consensus builder, who was not afraid of big ideas or the work it took to make them real. His focus on economic development that included support for the arts in addition to bringing in new businesses and jobs helped make Tompkins County a leader in central New York. I remember our 12 years together on the county board as filled with energy, vision and humor.”

Martha Armstrong, M.R.P. ’96, vice president and director of economic development planning for Tompkins County Area Development, says that as chair of the county legislature Stein “oversaw an era of bipartisanship in local government and has several remarkable achievements to his credit, including unification of three local bus systems into the TCAT bus service, creation of the Municipal Electric and Gas Alliance, and chartering the first economic development strategy for the county, among others.”

Stein attended the Massachusetts Institute of Technology, where he earned a bachelor’s degree in architecture in 1952 and a master’s in city planning in 1954.

At the start of his career, Stein served as the principal planner for the Rhode Island Development Council from 1954 to 1957. In 1957, he became a partner in Blair and Stein Associates, a planning consulting firm in Providence, Rhode Island; Washington, D.C.; and Syracuse, where he worked until he came to Cornell.