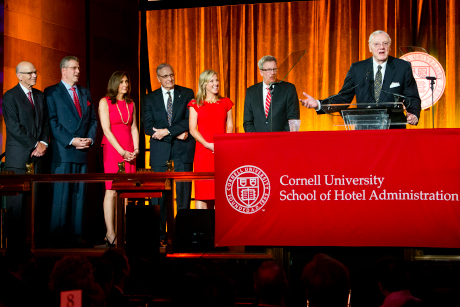 Jon Reis Photography
John Mariani ’54, chairman emeritus of Banfi Vintners, accepts the Cornell Icon of the Industry Award on behalf of his family.

The award, presented at SHA’s annual awards gala, recognizes Mariani family members for their achievements in business and support of hospitality education. Since it began in 2009, the awards gala has raised more than $1.2 million for the SHA Annual Fund.

“The Mariani family is a leading wine producer and merchant, but – more importantly – it is a leader in research and education that elevates the entire global wine industry,” said Michael Johnson, dean and E.M. Statler Professor of Hotel Administration.

John Mariani graduated from Cornell in 1954 and later joined his father in the family business. They were joined by John’s younger brother, Harry Mariani. John and Harry assumed control of the company in 1964 and expanded Banfi from a small wine house into America’s leading importer of fine wines. The brothers established the Banfi Foundation, which has supported Catholic Relief Services, charities and universities, and sponsored annual scholastic tours to study the food and wine culture of Italy. 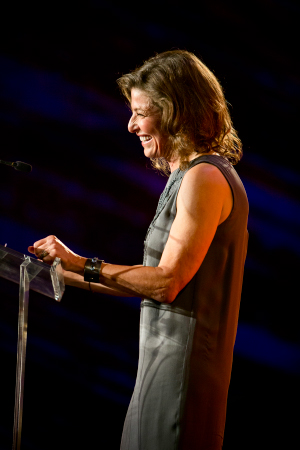 Recognized with the school’s 2014 Cornell Hospitality Innovator Award was Sandy Solmon, founder, president and CEO of Sweet Street Desserts, the largest manufacturer of frozen gourmet desserts in North America. The award is given annually by the Leland C. and Mary M. Pillsbury Institute for Hospitality Entrepreneurship.

“Passion and creativity are the hallmarks of an innovative company. Sandy Solmon infuses Sweet Street with both, which is why they have remained at the top of the industry,” said Johnson. “We are proud that Sandy is an active supporter of SHA, where she shares that same innovative spirit through our parent committee and the advisory board for the Pillsbury Institute for Hospitality Entrepreneurship.”

In 1994, the U.S. Copyright Office awarded Sweet Street Desserts the first-ever copyrights recognizing the design of food products. Solmon has been cited for her dedication to employing an ethnically diverse staff and for her community service in Pennsylvania.