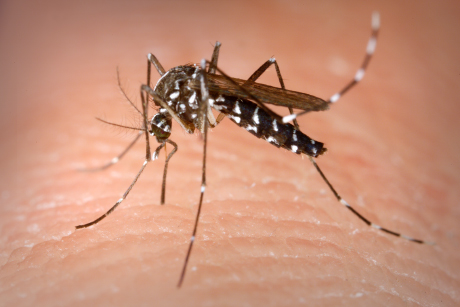 Better understanding of mosquito seminal fluid proteins – transferred from males to females during mating – may hold keys to controlling the Asian tiger mosquito, the world’s fastest-spreading invasive species, found in the U.S. and elsewhere. This mosquito is an important vector for dengue and chikungunya fevers as well as dog heartworm.

These seminal fluid proteins, it turns out, have profound effects on the female mosquito’s physiology post-mating, including rendering future eggs infertile and curbing the female’s appetite for blood.

For the first time, researchers from Cornell University and the College of Wooster have identified 198 seminal fluid proteins in the Asian tiger mosquito (Aedes albopictus).

The findings were reported June 19 in the journal Public Library of Science Neglected Tropical Diseases.

“Our results provide a foundation for future studies to investigate the roles of individual seminal fluid proteins on feeding and reproduction in this mosquito,” said Laura Harrington, Cornell professor of entomology and a co-author of the paper. Kathryn Boes, a postdoctoral researcher at the College of Wooster, is the paper’s lead author.

“Our paper is a significant step forward in our understanding of the mating biology of this species and will bring us closer to our goal of identifying novel targets for mosquito control,” Harrington added.

The researchers have been studying genes that express seminal fluid proteins, and trying to understand their functions and effects on the female after they are transferred. One possibility is to use these insights to develop genetically modified mosquitoes that can no longer transmit dengue, for example.

“Whether transgenic mosquitos will be accepted or not is another issue we are also considering,” said Harrington.

In past research, the scientists identified seminal fluid proteins in male Aedes aegypti mosquitos, which is related to the Asian tiger mosquito and also spreads dengue fever, chikungunya and yellow fever viruses, among other diseases. When comparing the proteins from the two mosquitos, the researchers found only about 36 percent of the seminal fluid proteins were similar between the two species.

“That’s not surprising, because we find that seminal fluid protein genes are rapidly evolving,” said Harrington. The comparable proteins point to genes that are likely conserved through evolution, suggesting they have important functions, and offering targets for further research.

Co-authors include Mariana Wolfner, Cornell professor of molecular biology and genetics, and Laura Sirot, assistant professor of biology at the College of Wooster.

The study was funded by the Cornell University Agricultural Experiment Station’s USDA Hatch funds and the National Institutes of Health.