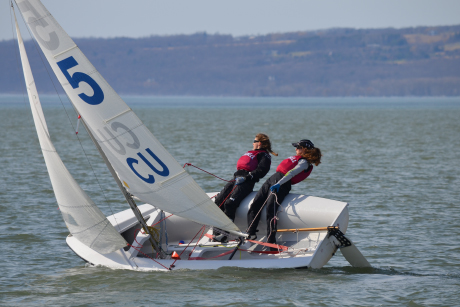 Provided
Women’s sailing at Cornell has been elevated from club status to varsity team level, it was announced June 23.

The sport of women's sailing at Cornell University has been elevated from club status to varsity team level, Andy Noel, the Meakem*Smith Director of Athletics and Physical Education, announced today.

“This is an exciting announcement for many in the Cornell community, and I'd like to thank the loyal and generous alumni who have fully funded this move to varsity status,” Noel said. “It is a requirement that any additional sports be fully funded before we are able to consider adding to our varsity roster. We are excited that our women sailors will have the opportunity to experience a varsity program.”

Over the course of the last several years, Noel has evaluated a variety of issues related to the feasibility of adding another sport in an effort to increase athletic opportunities for women. Careful consideration was given to facility availability, established interest, availability of regional competition and potential for competitive success. A core leadership group that included Doug Merrill ’89, Ted Moore ’71 and Rob Swanson ’74 advanced the interest of the women’s sailing program and assured it would be fully funded prior to implementation.

“We have been hoping for this move and our team members have been working hard to impress the Cornell community on and off the water,” said head coach Brian Clancy. “It is with tremendous support from our alumni, families and friends that we are able to make this happen for our team. We extend our deepest gratitude to those who have contributed their time and efforts to making this happen. We couldn't be more proud to represent the Cornell Big Red.”

With infrastructure already in place, the Big Red will continue to compete on a similar schedule to that of the former club program beginning this fall.

The sailing team will continue to train out of the Merrill Family Sailing Center, completed in 2009.

“The incredibly generous gift by the Merrill family toward the Merrill Family Sailing Center went a large way in allowing us to make this move,” Noel said. “Our women's sailing program immediately has a training center as impressive as any in the country.”

With the elevation of women's sailing to the varsity level, Cornell will now sponsor 37 intercollegiate programs (18 for men, 19 for women). The number of varsity sports offerings is fourth among all schools in the country, trailing only Harvard (41), Brown (38) and Princeton (38). Both Ohio State and Stanford sponsor 36 varsity sports. Women's sailing is the first addition to the varsity sports offering at Cornell since equestrian was elevated to varsity status prior to the 1995-96 school year.