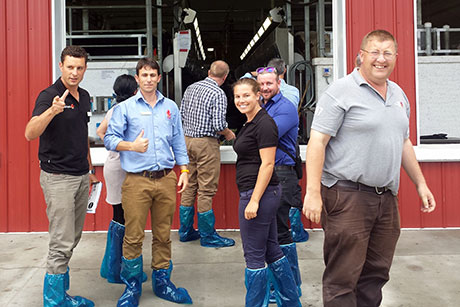 Lucy Cruickshank
Agriculturists from around the world tour the new Teaching and Research Center dairy in Harford, N.Y., as part of a weeklong visit to Cornell. The Nuffield scholars included, from left, John Murphy, Tim Gubbins, Jamie McCoy, Ben Ralston and Johnny Alvis.

Their visit, capped off July 8 with a public panel discussion about climate change perspectives from around the world, was hosted by the Cornell University Agricultural Experiment Station.

From the New York State Agricultural Experiment station in Geneva, N.Y., to the on-campus Ithaca dairy plant, the scholars saw the College of Agriculture and Life Sciences’ (CALS) dedication to agricultural innovation firsthand.

“I’ve been extremely impressed with the dairy and how it’s integrated right through to the students,” said Lucy Cruickshank, who owns an agricultural marketing and consulting firm in New Zealand. “It’s a really fantastic way of connecting the consumer with the producer.”

The college’s curriculum also made an impression.

“The success of the agricultural sciences major really ties into the future of agriculture,” Cruickshank said. “The program helps you see the connections between aspects like production and trading and marketing.”

“A lot of the stuff we’ve seen has been more practical, rather than just research-based,” Germano said.

Each scholar stayed with host families, all of whom were alumni or current class members of LEAD New York, a program that provides leadership training opportunities for professionals in food, agricultural and natural resource industries and is based at Cornell’s Community and Regional Development Institute.

“LEAD NY class members participate in international trips to learn about agricultural systems abroad and have been hosted by Nuffield Scholars in the past,” said executive director Larry Van De Valk. “We are delighted to collaborate with colleagues around the world in this way, and it has proven to be of great benefit to all those involved.”

“For me, it was really good to go and experience the culture outside of the group,” said Ben Ralston, a fifth-generation oyster farmer from New South Wales, Australia, who found the family-oriented Fourth of July celebration at Cayuga Lake “beautiful – it was really nice to see.”

Cornell was just one stop along the scholars’ journey. The seven-week program also took them to India, Qatar, Turkey, the Netherlands and France to connect with world leaders in agriculture and associated industries as well as share ideas and explore their own interests.

“You see these countries in a completely different way than how a tourist would see them,” said Tim Gubbins, a livestock manager from Victoria, Australia. “You really get into the workings of the country, because agriculture is everywhere.”

In India, Ralston was inspired by a visit to a fruit farm where the growers found innovative ways to make use of every part of their crops. Their practices got him thinking about how he could make use of the massive amount of oyster shells that his farm produces, and Ralston is now looking into how to turn the shells – which are high in zinc, lime and calcium – into fertilizer.

“Nuffield’s about what you can learn from a global network,” said Ralston. “I’ve picked up so many different ideas.”