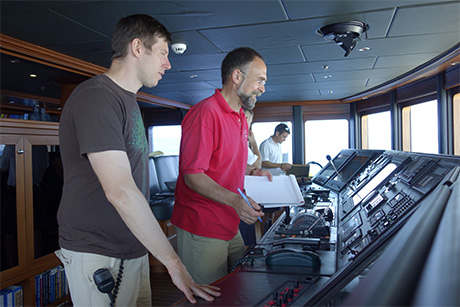 Provided
Brady O'Hanlon, foreground, and Mark Psiaki test their GPS spoofing detector aboard the White Rose of Drachs in June. 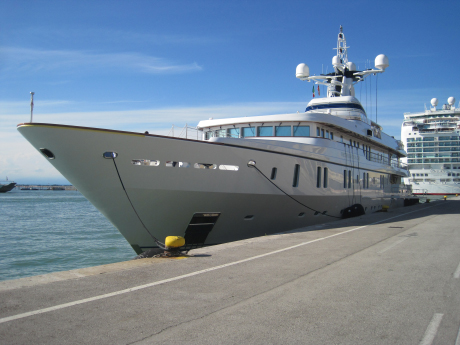 Mark Psiaki/Provided
The Cornell team set up their GPS spoofing detector on the deck of the White Rose of Drachs to intercept false GPS signals being propagated by a team from UT Austin.

Cruising the Mediterranean aboard a superyacht, a Cornell professor and grad student took their Global Positioning System (GPS) research to the high seas. For four days in late June, they tested the newest version of their GPS “spoofing” detector, which allows them to differentiate between real or fake GPS signals – a technology that could lead to protection strategies against insidious GPS hackers.

Mark Psiaki, professor of mechanical and aerospace engineering, and graduate student Brady O’Hanlon spent a week aboard the White Rose of Drachs, a privately owned luxury superyacht, testing their second-generation detector as the boat set out from Monaco, cruised around Italy, and eventually landed in Venice.

A spoofer, a device that produces false GPS signals that a receiver mistakes for real ones, was invented at Cornell by Todd Humphreys, Ph.D. ’08, now an assistant professor of the University of Texas at Austin. Humphreys tested his latest spoofer aboard the same yacht last year; this year, Psiaki and O’Hanlon joined for a follow-up experiment to see if they could outsmart the spoofer.

Humphreys’ spoofer and Psiaki’s detector have drawn interest from the public as well as federal government officials, who in 2012 allowed a GPS spoofing demonstration involving a “hijacked” mini drone at White Sands Missile Range in New Mexico.

Aboard the yacht in international waters, the Cornell and UT Austin teams were free to conduct their research unhindered; on land, it’s very difficult to get permission to hack a GPS signal, even for research purposes, Psiaki said.

Stationed in different areas of the boat, Humphreys’ team initiated a planned “attack” of the boat’s GPS receiver, overlaying a disguised false signal on top of the real one, and attempting to send the boat off-course without generating any obvious warning signs.

Psiaki and O’Hanlon’s job was to detect these false signals, through real-time analysis of their properties, and to provide protection against a would-be attack by issuing a definitive warning whenever false signal characteristics were uncovered.

The experiments proved the functionality of their second-generation detector and allowed them to pinpoint areas in need of improvement.

In one dramatic test, the yacht’s GPS receiver was spoofed into believing that it was veering off course to Venice and heading to Libya at a very high speed. The Cornell detector was able to warn the White Rose’s bridge crew about the attack before the yacht was 20 meters off course.

“We want to progress to the point where not only can we tell it’s a false signal, but we can also say, ‘Here is the true signal; here is the true position,’” Psiaki said.

The owner of the White Rose of Drachs, an anonymous businessman with whom Humphreys became connected through a conference in Austin, allows the boat to be used for scientific purposes during off seasons.

Psiaki will share results about the superyacht experiments at the Institute of Navigation’s GNSS+ conference in September in Tampa, Fla.

Researchers show how GPS receivers can be spoofed

Spoofed GPS signals can be countered