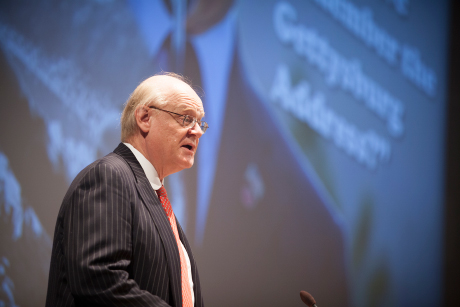 On the first anniversary of 9/11, New York’s governor at the time read the Gettysburg Address aloud during the commemoration ceremony at ground zero. In 1963, Martin Luther King Jr. began his “I Have a Dream” speech by alluding to the address.

Analyzed in at least nine studies in the last century, translated into dozens of languages and often memorized by American schoolchildren, Lincoln’s Gettysburg Address is remembered as one of the most important speeches in history, said Allen C. Guelzo, the Henry R. Luce III Professor of the Civil War Era and the director of the Civil War Era Program at Gettysburg College, speaking in Bailey Hall July 30.

Lincoln’s 272-word speech, given during the war, four-and-a-half months after the Union’s win at Gettysburg in 1863, used 190 single-syllable words and only included four four-syllable words, he said. The highly logical Lincoln followed the “Churchillian Dictum,” Guelzo said: “Short words are best, and old words, when short, are best of all.”

Lincoln also used a form of “middling speech,” said Guelzo: “short, pungent, colloquial vocabulary” as opposed to “the hyper-inflected Latinate lexicon beloved of so many school textbooks.” This dialect could slip into a type of slang, added Guelzo, frequently “to the discomfort of the prissy,” like the elite slave-owners of the time.

“The address marks the end of the culture of eloquence, burying it alongside the soldiers in the national cemetery,” he said.

And yet the address commands attention with more complex vernacular at times, including the famous, repetitive triplets “we cannot dedicate, we cannot consecrate, we cannot hallow this ground” and “government of the people, by the people, for the people,” Guelzo added.

“The address is an effort to persuade, not to ornament or decorate. And each stroke of those triplets is a powerful pull on the convictions of Lincoln’s listeners,” Guelzo noted.

However influential these grammatical features may be, Guelzo said that he thinks it is the survival of democracy that mainly contributes to the address’s cultural significance. The Union side was fighting for a united government ruled by the people, and the speech, Guelzo said, is fundamentally a list of reasons why democracy should not be deserted. In the 1860s, democracy had been globally “discredited and disgraced,” Guelzo said. At the start of the war, Guelzo said that Lincoln told his secretary, “If we fail, it will go far to prove the incapability of the people to govern themselves.”

While the war was far from over, Lincoln renounced the global criticisms of democracy that day, Guelzo said. The speech’s genius lies “in the new birth it gave to those who had become discouraged and wearied by democracy’s follies. …

“Perhaps, in the end, the greatness we have not suspected in the Gettysburg Address lies in its humility, in its reminder that the question of democracy’s survival rested ultimately in the hands not of czars, but in those of citizens. Citizens who saw in democracy something worth dying for,” Guelzo concluded.

This lecture was sponsored by Cornell’s School of Continuing Education and Summer Sessions.