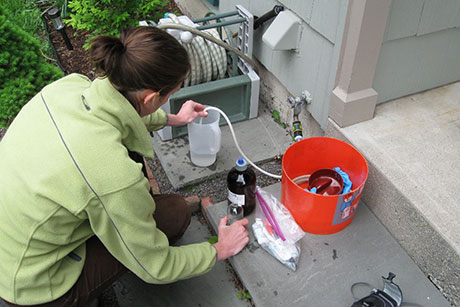 Two Cornell hydrologists have completed a thorough groundwater examination of drinking water in a potential hydraulic fracturing area in New York’s Southern Tier. They determined that drinking water in potable wells near conventional natural gas wells in Chenango County is safe to drink and within federal guidelines.

The researchers report their findings in July’s Journal of Hydrology – Regional Studies.

“In Pennsylvania, reports of natural gas in the groundwater started to occur after the state began to allow hydraulic fracturing. Nobody had thought to test the well water there beforehand, and no one had a sense of the water quality prior to fracking. We’ve conducted a comprehensive baseline study of the water,” said Todd Walter, associate professor of biological and environmental engineering, the paper’s senior author.

“We’re verifying that the water quality here [in the Southern Tier] is pretty good,” said lead author Lauren McPhillips, doctoral candidate in the field of biological and environmental engineering. “There is some naturally occurring methane caused by geology – and not by humans – but none of the concentrations we found hit levels considered dangerous,” she said.

“With the potential for unconventional technology (high-volume, hydraulic fracturing of horizontal wells) being used to access Marcellus Shale gas resources in New York state, it is important to gather baseline information on water quality before this contentious technology is implemented,” the researchers wrote.

In nearby Pennsylvania, which allows hydraulic fracturing, one research group led by Robert Jackson of Duke University found higher groundwater methane concentrations and “thermogenic isotope signatures” (chemical fingerprints caused by deep, natural processes in the Earth) near existing gas wells, but no correlation to other factors.

Another study led by Lisa Molofsky of GSI Environmental Inc. in Houston found no relationship between dissolved methane in groundwater and proximity to gas wells, but did find methane concentrations were higher in valleys and in groundwater dominated by sodium chloride or sodium bicarbonate.

Four of 10 wells forecast to fail in northeastern Pennsylvania