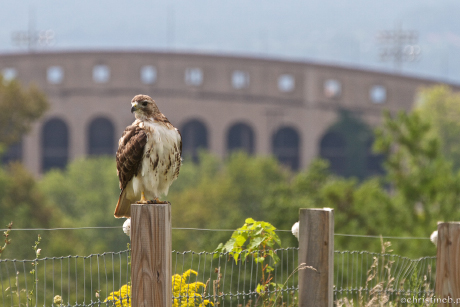 Thanks to Cornell Lab of Ornithology webcams and local bird enthusiasts, anyone in the world can see into the lives of a family of red-tailed hawks that resides on a light-pole about 80 feet above an athletic field on campus.

More than five million viewers across 200 countries have been following the exploits of Ezra (father) and Big Red (mother) and their offspring since in 2012. This year three nestlings hatched.

“Our love of birding was set on fire after watching the 2012 Cornell Bird Cams and falling in love with both Big Red and Ezra and the Hellgate ospreys,” says Cindy Sedlacek ’84, director of data administration and reporting in the College of Arts and Sciences. She and her husband, Karel Sedlacek, applications analyst in Alumni Affairs and Development, are part of the growing community of “birders on the ground” or BOGs. The Sedlaceks regularly live stream the red-tails and ospreys on campus and around Ithaca. 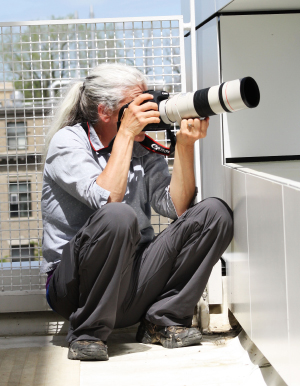 There are also several local BOGs – Christine Bogdanowicz, Amy Layton and William Horning, MPS ’10, among them – who provide photographic views into the lives of these birds. Layton, who works for Weill Hall Facility Services, notes: “I use a regular digital camera and try to capture scenes the other camera cannot reach, especially when the young hawks fledge. … I usually go out on my lunch breaks and come in early before work, as they tend to be more active in the mornings.”

Some bird enthusiasts become cam moderators, who must undergo a formal application process and then volunteer time to watch over the live chat associated with the live stream. “Most started out through just viewing the cam and participating in the chat room,” says Ellen Kwa ’90. “[They] then graciously volunteered their time, resources and knowledge to enrich the experience for other people.”

Equally important to the birding process are the viewers of the cams, which Kwa stresses as fundamental to the growing “hawkaholic” community. “Some chat and some do not. Some people choose to interact through Facebook, Yahoo and Twitter. It’s safe to say that some lasting and wonderful friendships have been formed through this experience.”

Kwa says: “The more one watches the cams, the more one comes to appreciate the hawks’ individual personalities, including the nestlings. Like people, some are more laid back and some are more assertive. … These hawks are at times, well, just funny.  It has been hilarious from the start to see how Ezra tries to linger in his brooding time over the eggs and how Big Red then gives him a kick in the butt … literally!”

“[The hawks] epitomize the word ‘dedication,’” says Layton. “I will never forget watching during a terrible rainstorm as Big Red spread her wings and sheltered her three chicks, and Ezra covered Big Red with his wings, even though he is much smaller than she. They stayed there until the rain subsided, wings spread wide.”

Most recently, the last hawk to hatch, known as E3, was injured a day after he flew from the nest, suffering from a fractured bone and a ruptured muscle in its right wing. He underwent two surgeries at the Janet L. Swanson Wildlife Health Center at Cornell.

According to the Lab of Ornithology’s live red-tailed hawks site, “Without a return to a full range of motion in his injured wing, it is less likely that E3 will be releasable, but he has a long way to go before the veterinarians ultimately know what he will be capable of doing.”

“There is a support page for E3 in which the hawk community has helped raise over $14,000 for the Wildlife Health Center,” says Cindy Sedlacek, who notes the growing community and culture of cooperation among fellow bird watchers.

“We all help each other and keep eyes to the sky to get the best coverage possible,” says Layton. “The more eyes the better.”

A few times a year, social gatherings under the nest for both camera folks and viewers bring the fellow bird watchers together.