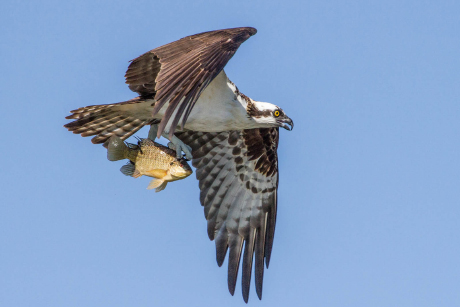 Candace Cornell
An osprey with a fresh catch.

In the last five years, the number of observed osprey – fish-eating birds of prey – in the Cayuga Lake basin have increased sevenfold, including a new nest this year near Game Farm Road on university athletic fields near Cornell’s campus.

Ten years ago, osprey nests did not exist around Ithaca, and five years ago, there were only six known active local nests, said Candace Cornell, a biologist, osprey enthusiast and retired Cornell Lab of Ornithology staff member who has been tracking ospreys in the Cayuga Lake area. But this year, Cornell and others have identified at least 38 active breeding nests.

The sole nest on Cornell property houses a breeding pair and their two chicks and sits on top of a light pole next to the soccer field. One of the two chicks was born June 16 and the other two days later. The male has been seen fishing in Beebe Lake, Six-Mile Creek and Cayuga Lake, all within a few miles of the nest.

“The 38 active nests I observed are all visible from public roads, and I am sure there are far more unreported nests on private property,” Cornell said. She hopes to find more nests in the Cayuga basin in a fall survey of the area by boat and helicopter.

Currently, active nests are found along Cayuga Lake, Game Farm Road, Cass Park’s Union Fields and the Robert Treman Marina in Ithaca. Lansing also hosts two active nests at Salt and Portland points. More nests have been sighted along the I-90 Corridor and at the Montezuma National Wildlife Refuge, among other areas.

“Ospreys like to nest in the open on tall strong structures, like utility poles and light poles,” Cornell said. That way, they can see the chicks’ mortal enemies, primarily eagles during the day and Great-horned Owls at night.

Failed nests this year were probably started too late and will be used for breeding next year, Cornell said.

The pair at Union Field got a late start nesting and probably won’t brood this year, said Cornell. After building on a hazardous athletic field light, New York State Electric and Gas Corp. moved the nest to a safe riser, which further disrupted the pair. Even though they may not breed, they are working on their nest. They will probably have a brood next spring, Cornell said.

“We are having an osprey population explosion around the lake,” she said.  “We need to identify target areas and put up more platforms to meet the growing demand.”

Ospreys nearly went extinct from the 1940s to the 1970s due to DDT spraying, but since such contaminants have been banned, these highly adaptable birds have rebounded across the Northeast U.S. and elsewhere.

The rise in local populations are likely a result of a number of factors, including a high breeding success rate, long-lived adults capable of reproducing into their 20s, excellent fishing in Cayuga Lake, clean water replete with shallow fishing areas, and ample artificial nest sites such as utility poles and athletic field lights, Cornell said.

Also, surrounding populations in the Great Lakes and along the Eastern Seaboard have done very well, creating a spillover effect around the Finger Lakes, said osprey expert Alan Poole, editor of Birds of North America Online and a senior research associate at the Cornell Lab of Ornithology.

Hacking programs, where young pairs have been relocated to sparsely populated locales, have also played a role in rebounding populations, Poole said.