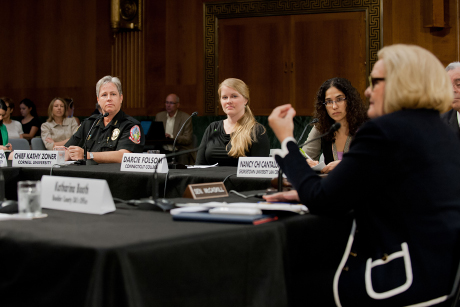 After participating June 23 in a Washington, D.C., roundtable discussion, “Campus Sexual Assault: The Administrative Process and the Criminal Justice System,” Cornell Chief of Police Kathy Zoner said that Cornell University is already addressing the concerns of many other colleges and universities in its coordination of effort with local law enforcement agencies and training for its responders.

But, Zoner said, Cornell has much work ahead to address factors in the campus culture that contribute to sexual violence, and she would like to see preventive discussions happening at a much earlier age in students’ lives – long before they arrive on campus.

The roundtable, which included Zoner and 10 other law enforcement officers, district attorneys, victim advocates and university administrators from across the country, was held at the invitation of Sen. Claire McCaskill (D-MO). Working with Sens. Richard Blumenthal (D-CT) and Kirsten Gillibrand (D-NY), McCaskill plans to incorporate the information gathered at this and two other roundtables into legislation that better addresses campus sexual assault.

Zoner said that Cornell University Police and local law enforcement are proactive about maintaining open lines of communication and collaboration regarding incidents of sexual violence.

“The first thing any of us does when we receive a report of sexual violence is to connect with the survivor/victim of the incident to assess the care he or she needs,” Zoner said, “including genuinely listening to them, providing advocacy and support, and, should they choose, gathering up information for an official report of the incident for a criminal or administrative investigation.”

“The survivor should not be required to tell his or her story multiple times in order to get help from us,” Zoner said. Responders receive regular, ongoing training for gathering information and connecting survivors with campus or community resources.

“At Cornell, we still need to work toward broad-based changes in the campus climate, so that all members of the Cornell community treat each other with respect,” Zoner said. She noted that panelists in Washington talked about the connections between drugs, alcohol and violence, and said she believes that working toward an environment of civility and caring could address all three areas of concern.

“I am heartened by the increase in the number of reported incidents, indicating not that the campus is less safe, but that people are feeling more comfortable turning to our many campus resources for help,” Zoner said.

Of the issues raised at the panel, maintaining confidentiality to protect the survivor and the accused is one of the most complex and is further complicated by the prevalence of social media, Zoner said. “We in law enforcement and university administration can be as confidential as possible, but in a small community, the use of social media, even among friends, can be damaging to those involved in a case,” she said.

Zoner said the D.C. panel helped clarify how colleges and universities are attempting to fulfill numerous legal requirements in their investigations of sexual violence. But she said she would have liked to spend more time discussing education targeted to middle schools and high schools regarding respect for individuals, responsible social media use, sexual consent, bystander interventions and the responsible use of alcohol. “We need to teach these community values and behaviors starting at an early age; not just once a child moves away from home,” she said.