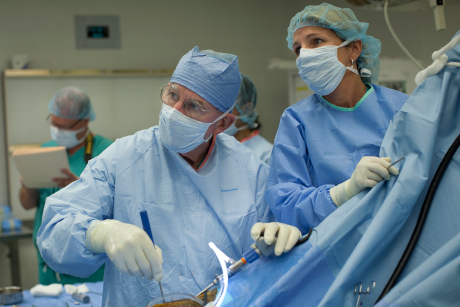 A pair of unique surgical procedures performed on animals promises to revolutionize the ways surgeons repair cartilage and meniscus tears in human knees and other joints.

In the first set of procedures, a cross-institutional, interdisciplinary team of surgeons and researchers tried a new method for cartilage repair on horses at the Cornell University Hospital for Animals Aug. 21.

Another team will try a meniscus repair procedure on sheep Sept. 3 and 4. The meniscus repair involves custom-designed and individualized replacement parts. With information from an MRI scan of the patient’s joint, the researchers will use a 3-D printer to assemble an artificial meniscus fitted to the patient’s body.

The surgeons and researchers taking part in these groundbreaking preclinical trials include medical staff from Cornell’s College of Veterinary Medicine, the Hospital for Special Surgery (HSS) – a section of the NewYork-Presbyterian Healthcare System and an affiliate of Weill Cornell Medical College in New York City ­– and the New York Giants football team.

“The goal is to make these technologies available for people,” said Lisa Fortier, professor of large animal surgery at Cornell’s College of Veterinary Medicine. “If they do well in these animals, then the FDA [Food and Drug Administration] can approve it for use in humans,” a process that can take months or years, Fortier said.

The Aug. 21 procedures involved one-hour surgeries on five horses to practice a new procedure and use a cartilage repair device developed by Suzanne Maher, a biomechanical engineer at HSS and a member of the research team. She designed an off-the-shelf biocompatible scaffolding that can be surgically inserted into damaged cartilage for repair and to prevent the onset of arthritis.

Cartilage defects occur due to overuse or from such traumatic episodes as a crucial ligament tear or rupture, for example.

“We know that any of those types of cartilage defects can lead to arthritis,” which the procedure aims to prevent, Fortier said. Once cartilage is torn, there is currently no viable repair nor does it heal on its own, she added.

The second procedure will involve a preclinical meniscal transplant on sheep, which is part of a multiyear National Institutes of Health grant. When torn or deteriorated, the meniscus does not heal on its own. So far, the “gold standard” for replacement comes from cadavers, tissue that is hard to match and obtain and may transmit diseases, Fortier said. Artificial scaffolds have also been ineffective.

Jeremy Mao, professor of dental medicine at Columbia University, developed a meniscal transplant made from biodegradable polyester and that includes growth hormones. Using an MRI scan and a 3-D printer, the researchers can build an individualized meniscus using the polyester. Once transplanted, the new meniscus is designed to recruit the body’s own stem cells for healing.

Over the two days of meniscus surgeries, the team – including Fortier and surgeon Scott Rodeo, a specialist with HSS – will operate on eight sheep, though the entire project will entail 60 such surgeries for controls and to test levels of growth factor hormones.

“My goal is to be able to use these procedures in my own [animal] patients,” added Fortier.