Lambert studied ornithology, anthropology, drawing and fine arts as an undergraduate at Cornell, and completed a master’s degree in anthropology and zoology at the University of Michigan in 1951. After doing anthropological fieldwork in Peru, he returned to Cornell as a drawing instructor in 1953 and spent the next 45 years teaching freehand, nature and scientific drawing, and watercolor in the College of Agriculture and Life Sciences (CALS), primarily in the Department of Floriculture and Ornamental Horticulture.

Starting in 1962, Lambert led the Freehand Drawing Program, which traces its roots back to Cornell’s founding, and he was promoted to full professor in 1977. During that time, he nurtured the artistic abilities of students throughout the university, especially those studying landscape architecture and design.

“Jack inspired generations of artists who now engage in all walks of life, from the life sciences, to communications, marketing, medicine and a host of other disciplines,” said Marcia Eames-Sheavly, senior extension associate and lecturer in the horticulture section of CALS’ School of Integrative Plant Science. 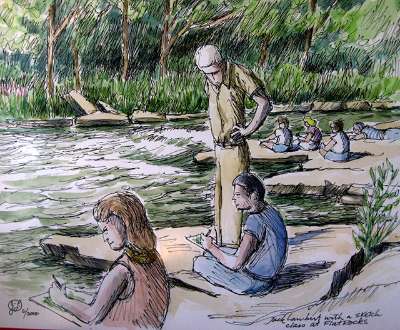 Provided
A Lambert self-portrait with students at Flat Rock, Fall Creek, one of his favorite places to paint.

“He taught the power of keen observation and encouraged students to pause to record nature’s beauty everywhere,” she added. “He possessed a wry wit, strong opinion and a unique lens through which he viewed the world. And his dedication to teaching made him beloved by students.” Eames-Sheavly was one of those students, and she is carrying on Lambert’s legacy by teaching Art of Horticulture and a series of online botanical illustration courses.

Lambert retired in 1997 but continued teaching as an emeritus professor, including a weekly lunchtime art class for employees.

His artwork has been exhibited in numerous galleries, museums and juried shows, and is included in many publications and private collections. He also planned and supervised the construction of a rock garden at Cornell Plantations.

He and his late wife, Nina, were active members of numerous horticultural organizations, including the North American Rock Garden Society, and they hosted many tours of their Cayuga Heights garden.

“Jack was a gifted artist, endearing professor and valued member of a department where art and science did not always intermingle comfortably,” said Professor Emeritus Thomas Weiler, former chair of the Department of Floriculture and Ornamental Horticulture. “He generously shared his finely honed techniques, bringing out unrealized talents in his students. He will be missed by all who knew him.”

Lambert is survived by his daughter, Sarah L. Lambert, and son-in-law Michael J. Ward. In lieu of flowers, donations in Lambert’s memory may be made to Kendal at Ithaca.

Craig Cramer is a communications specialist in the Department of Horticulture.