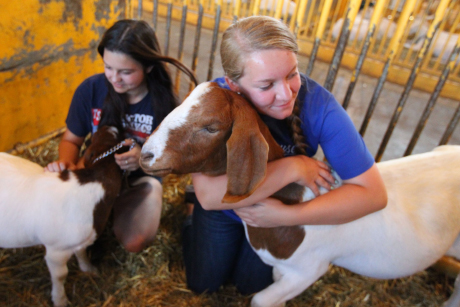 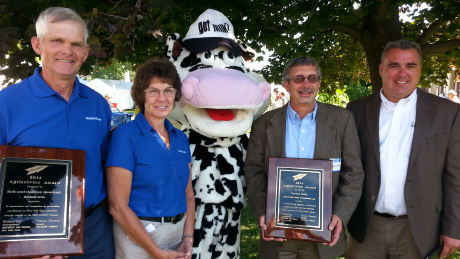 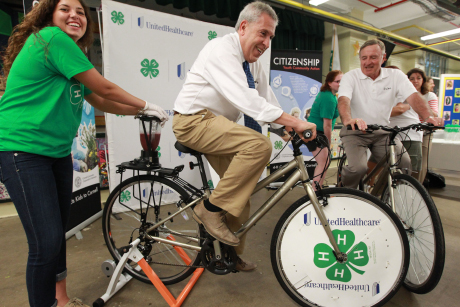 Michael Okoniewski
Alan Mathios, dean of the College of Human Ecology, uses pedal power to create a nutritious and delicious smoothie at a 4-H exhibit in the Youth Building on opening day of the 2014 Great New York State Fair.

“Being the New York State Dairy Princess has been an amazing, rewarding experience,” Porter said. “I get to meet so many wonderful people.” On Aug. 26, she started her first day at Cornell as an animal science major.

Cornell Dairy’s vanilla and Greek-style yogurt has been a hit at the Yo2Go stand in the Dairy Building. Gary Repko, Yo2Go’s manager, said Cornell delivered 600 more pounds of yogurt Aug. 22, supplementing the 2,000 pounds provided at the start of the fair, and he expected he would need several more deliveries to meet demand.

Many Cornell students, faculty and alumni are among this year’s 400 volunteers at the Dairy Cow Birthing Center, organized by the New York Animal Agriculture Coalition.

Cow #6229 from Walnut Ridge Dairy in Lansing, New York, had trouble delivering a calf early in the afternoon Aug. 25. Sabine Mann, a resident at Cornell’s College of Veterinary Medicine; Tyson Benson, DVM ’09, who practices in Auburn, New York; and Wade Walker, DVM, a surgery resident at Cornell's Equine and Farm Animal Hospital, attended to the cow.

The calf was not in the correct “superman” position for birthing, and after about two hours of labor, Benson performed emergency cesarean section surgery on the cow and removed the stillborn calf. “This is why we have veterinarians here at the fair,” he said. He noted the 600 fascinated fairgoers watching the surgery and said, “They seemed to be very respectful.”

Birthing Center volunteers like Sarah Fessenden ’15 and Rachel Sammons ’15, both members of Cornell’s Dairy Science Club, and Katie Andrews ’14, M.S. ’16, answered dozens of questions from the public about the cows.