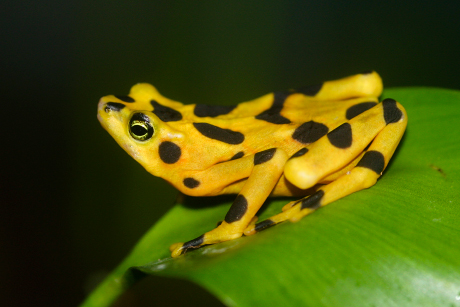 Brian Gratwicke
Panamanian golden frogs have been driven to near extinction, largely from Bd and habitat loss, though intensive captive breeding projects in zoos are maintaining the species.

A deadly fungus has decimated certain populations of amphibians globally for the past few decades, but scientists remain unclear about the exact mechanisms that lead to its disease.

For example, while some species have become threatened or gone extinct, others appear unaffected, or the disease persists at reduced frequencies following an outbreak.

A new Cornell study, published in the July issue of the journal G3: Genes, Genomics, Genetics, teased out the mechanisms at play by examining which genes are turned on and off in the highly susceptible Panamanian golden frog (Atelopus zeteki) following infection of the fungus Batrachochytrium dendrobatidis (Bd).

The researchers found significant changes in thousands of genes of frogs infected with a virulent strain, compared with uninfected (control) frogs and those that had been exposed to less virulent strains of the fungus and survived.

At the same time, the fungus also appeared to suppress immune genes related to pathogen-fighting T-cells in the spleens of infected frogs.

“T-cells are being suppressed by the fungus, and that could be a large part of why this fungus is devastating to certain species,” said Amy Ellison, the paper’s lead author, a postdoctoral research associate in the lab of Kelly Zamudio, the study’s senior author and the Goldwin Smith Professor of Ecology and Evolutionary Biology in the College of Arts and Sciences.

Panamanian golden frogs have been driven to near extinction, largely from Bd and habitat loss, though intensive captive breeding projects in zoos are maintaining the species.

In the experiment, all of the frogs exposed to the virulent strain died. But when they compared infected frogs with the controls, there were thousands of changes in the genes, including a wide array of immune genes, between the two types.

For example, Ellison and colleagues discovered that genes that control inflammation in the frog’s skin were more active. “This is not necessarily a good thing, since severe inflammation may be pathological,” said Ellison.

In the spleen, there was a striking difference between frogs exposed for the first time compared with frogs that had been infected twice with the two Bd strains; the genes that control enzymes involved in breaking down chitin, one of the main components of fungal cell walls, were more active in the previously infected frogs.

So, while some immune genes were more active, important genes related to T-cells and immune defense were simultaneously suppressed, leading the authors to believe that susceptibility is not necessarily due to a lack of immune response but to a failure of those responses to be effective.

“This is the first time we have seen that susceptibility is not a lack of immune response; [the frogs] are responding, but the fungus may be countering these immune responses,” which leads to infection, said Ellison.

In future studies, the researchers hope to do similar tests on the RNA (transcriptomes) of resistant species to see which genes are switched on and off.

The study was funded by the National Science Foundation, the Cornell Center for Vertebrate Genomics and Cornell’s Atkinson Center for Sustainable Future.