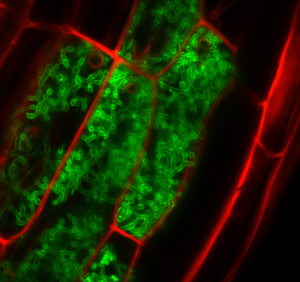 Jeon Hong and Maria Harrison
This image shows an arbuscular mycorrhizal fungus (green) inside Brachypodium distachyon root cells (red). The fungi invade root cells and naturally deliver essential nutrients phosphate and nitrogen - which are necessary for plant growth, development and yield - from the soil to the plants. 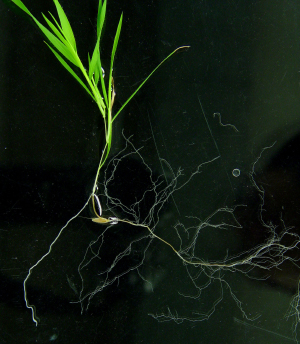 An upcoming genetics investigation into the symbiotic association between soil fungi and feedstock plants for bioenergy production could lead to more efficient uptake of nutrients, which would help limit the need for expensive and polluting fertilizers.

The study is part of a three-year, $864,400 U.S. Department of Energy (DOE) grant to researchers at the Boyce Thompson Institute for Plant Research (BTI) at Cornell. It is one of eight awards nationwide by the DOE last month aimed at accelerating genetic breeding programs to improve plant feedstocks for the production of biofuels, biopower and bio-based products. The U.S. Department of Agriculture also funded two additional projects as part of this program.

Maria Harrison, a professor at BTI, is the grant’s principal investigator. Co-PI Zhangjun Fei, an associate professor at BTI, will provide bioinformatics expertise for the project. They are Cornell adjuncts in plant pathology and plant microbe biology.

The grant has two parts:

First, Harrison and Fei will use genetics to examine the symbiotic relationship between Brachypodium distachyon (Bd), a model grass species, and Arbuscular mycorhizal (AM) fungi, soil fungi that invade root cells and naturally deliver essential nutrients phosphate and nitrogen – necessary for plant growth, development and yield – from the soil to the plants.

Switchgrass and sorghum, for example, are both grasses considered to be important biofuel feedstocks.

Harrison and Fei will study how the Bd-AM symbiosis occurs. Specifically, they will identify which genes code for proteins that facilitate the transfer of phosphorus from the fungi to plant roots. These are significant because phosphorus is immobile in soil and is therefore difficult for roots to capture. Using reverse genetics, the researchers will knock out specific genes to determine whether those genes are functionally important for the symbiosis, Harrison said.

The second part of the study will examine natural variation in sorghum, a species that is extremely genetically diverse, with many versions of the same genes (alleles). The researchers will look across many natural varieties of sorghum to determine if some varieties respond better to symbiosis than others. They will then try to identify genes and alleles that might contribute to the enhanced symbiosis.

This is also important because phosphorus rock used for fertilizers is a mined resource, and supplies are dwindling.

“In most soils, we can’t go to zero fertilizer use because there are not enough [nutrients] in the soil, but we can reduce inputs, and fertilizer applications can be more efficient,” she added.

The research also seeks to aid breeders by identifying parts of the plants’ genomes that make the symbiosis between soil fungi and plants more efficient, and then incorporate those genes into new cultivars.