Chow mein on Mars? Moo shu on the moon? What would it be like to stir-fry in space? A bit messy, according to Cornell researchers, who recently conducted the first partial gravity cooking on record.

Caldwell discussed his adventures Aug. 7 at Inside Cornell NYC, a series of briefings for journalists at the ILR Conference Center in Manhattan that feature the work of Cornell faculty, staff or alumni.

In a series of four flights launched from Houston, the team tossed tofu and shredded potatoes into pans of sizzling oil and filmed the resulting oil splatters as the plane climbed and dove in parabolic paths. Each cycle created a brief period of partial weightlessness, simulating the conditions astronauts would face during extended stays on the moon or Mars, which have one-sixth and one-third the gravity of Earth, respectively.

The experimenters positioned strips of paper inside the galley fume hood and dyed the oil bright red to help them see and collect splatter patterns. Under reduced gravity conditions, the food settled more slowly into the pan, and more oil appeared to fall outside of it. The oil droplets also traveled a greater distance from the pan than under Earth conditions – probably because it took longer for gravity to pull them down, Arquiza said. 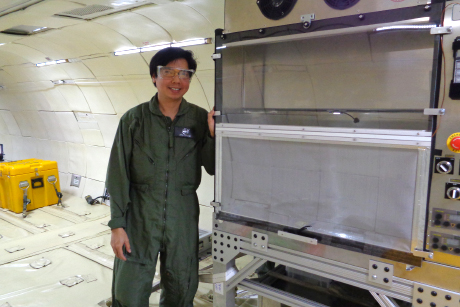 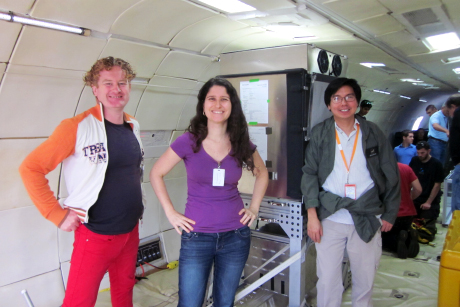 Arquiza ended up with a collection of 200 red-speckled strips that might resemble evidence from a crime scene investigation, but could contribute greatly to our understanding of the basic science of cooking in space. He is now analyzing them to measure the particles’ size distribution and distance traveled. Results will be used to create computer models that could be extrapolated to inform the design of future terrestrial and extraterrestrial cooking technology.

“It’s amazing to be able to marry the computational aspects of research with real-life feet-on-the-ground – or in this case, not on the ground – data to get a fuller picture of what is going on,” Hunter said. “Understanding oil spatter in reduced gravity is a big step toward designing safe and convenient cooking facilities for future space colonies.”

The trip was the culmination of months of research and tinkering. Every detail had to be finely tuned, even the ideal power setting on the induction cooker to heat the oil quickly without crossing its smoke point. The team had just 30 seconds to complete each experiment once a parabola began, Arquiza said.

Incorporating design elements from submarine galleys and chemical fume hoods used in labs, Arquiza and Carranza created an enclosed unit with activated charcoal filters and a fan that sucks in air from the front and draws particles away from the cook. It had to be strong enough to withstand 9 Gs worth of force, and also control frying odors, because, as Hunter notes, “on the moon, you can’t open a window to air out the kitchen.”

Prior to the flight, the researchers modeled air flow using computational fluid dynamics and dry-ice fog. On the flight itself, they were aided by experts at the NASA Reduced Gravity Research Program, including astronaut Cady Coleman and Sarah Gonzales ’96, program coordinator with the Reduced Gravity Education Flight Program.

The project is part of a larger investigation by Hunter’s lab into scientific and social aspects of food in space, including a simulated Mars mission in Hawaii to test resource use, menu fatigue and the benefits of home cooking in an enclosed environment, and a bed rest study to test the effects of simulated weightlessness on smell and taste perception.

Stacy Shackford is a writer for the College of Agriculture and Life Sciences.

What’s for dinner on Mars?