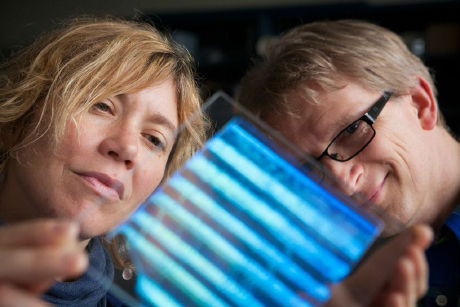 For her newest work, Korean artist Kimsooja wanted to explore a “shape and perspective that reveals the invisible as visible, physical as immaterial, and vice versa.”

As artist-in-residence for the Cornell Council for the Arts’ (CCA) 2014 Biennial, she has realized that objective with “A Needle Woman: Galaxy was a Memory, Earth is a Souvenir,” to be installed on the Arts Quad next week. It will be one of several installations on campus for the semesterlong biennial, “Intimate Cosmologies: The Aesthetics of Scale in an Age of Nanotechnology,” beginning Sept. 18 with a talk by Kimsooja.

The biennial theme intends to “show how artists address realms of human experience that lie beyond our immediate sensory perception,” CCA Director Stephanie Owens said. “Working with scientists and researchers makes it possible to produce art at the edges between disciplines … generating lots of productivity and new thought.” 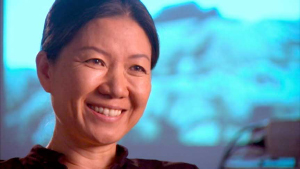 Kimsooja’s 46-foot-tall structure features an iridescent polymer film developed at Cornell, reflecting light with structural colors similar to those in a butterfly’s wings. Creating it involved some diligent problem-solving by materials scientists in the lab of Uli Wiesner, the Spencer T. Olin Professor of Engineering.

Owens first connected artists, musicians and scientists on campus in a series of lunchtime discussions two years ago. Wiesner said “I thought, this is what I really wanted to have in a university, a place of knowledge – [where] you can do stuff that goes beyond borders.”

Last November, Wiesner met with Owens and Kimsooja. “My group brought a glass vial that had a block of polymer dissolved in a solvent. It had iridescent colors, like an opal,” he said. “When you turned it, it was dynamic; the solution would flow around, and the colors changed. And Kimsooja loved it and said, ‘This is what I want on my structure.’”

The group, including chemistry Ph.D. student Ferdinand Kohle and postdoctoral researcher Hiroaki Sai, worked out how to create a polymer producing the desired optical effect and how to adhere it to Plexiglas panels on Kimsooja’s structure. Architecture students assisted with materials and fabrication. 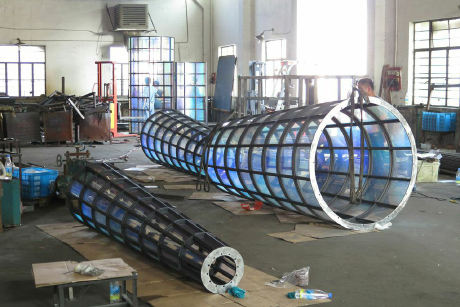 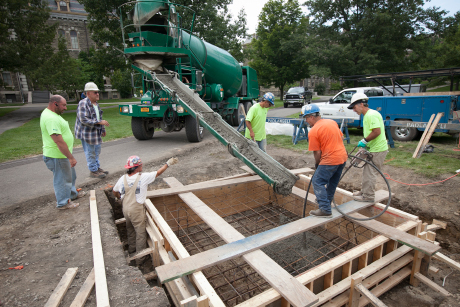 Jason Koski/University Photography
A construction crew pours concrete for the base of Kimsooja’s “Needle Woman” on the Arts Quad Aug. 27.

“I really love how world-class science has been incorporated in world-class art,” Hinestroza said of the Kimsooja-Wiesner project. “The fundamental science behind the coatings developed by the Wiesner group, the chemistry developed by Hiro, as well as the methods pioneered to coat the films with such nanoscale precision by Ferdinand, are indeed revolutionary – and the use of these materials to assemble a large structure like Kimsooja’s needle is simply breathtaking.”

Architecture student Joseph Kennedy ’15 and Caio Barboza and Sunny Xu, both B.Arch. ’13, created “Paperthin,” an interactive installation in the Physical Sciences Building based on the textured landscape of a sheet of paper at nanoscale. Physics researcher Robert Hovden, Ph.D. ’14, created “When Art Exceeds Perception,” a series of imperceptible nano-scale engravings of famous works of art.

“Artists that engage research as part of their process,” Owens said, “can find partnership and shared vision with like-minded pioneers in [other] disciplines … and in doing so, catalyze aspects of their work that can take on new and unexpected directions.”

Additional events and exhibitions will be announced.