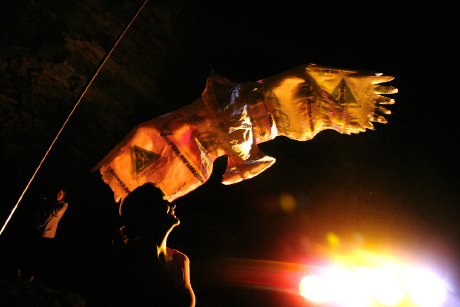 William Staffeld/AAP
A bald eagle shadow puppet made by Jenn Houle for her "Featherlight" installation Sept. 26 in the Ithaca Falls gorge.

Art student Jenn Houle, MFA ’15, taps into the local histories of silent film production and gunsmithing with “Featherlight (Foul Falls),” an installation she will present Sept. 26 from 7:30 to 9:30 p.m. at the Ithaca Falls Natural Area. The public is invited.

With colored lights and shadow puppets that double as kinetic sculptures, the installation will “morph the stone walls of the gorge into a modern-day cave painting,” Houle says.

Houle has crafted five bald eagle sculptures from recycled plastic bags to use as shadow puppets. The bird sculptures began with Houle researching specimens in the Cornell Lab of Ornithology’s taxonomic collections. The walls of her studio in the Foundry are filled with painted renderings of bird and animal life. 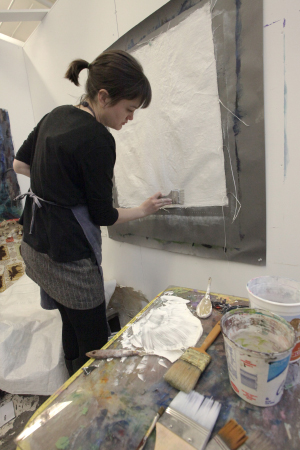 William Staffeld/AAP
Artist Jenn Houle, MFA '15, works in her studio in the Foundry.

A native of New Hampshire, Houle taught art for K-8 students in Boston before coming to Cornell.

“I’ve always loved and been interested in animals [and] how other beings perceive the world,” she says. “A lot of my work focuses on the intersection of humans and animals – the difference between us as organisms, the interconnectedness of us as species on this planet and the spirituality I find in that.”

She will project colors into the waterfall with 1,000-watt halide construction lights and create a shadow play of birds on the site, and she will film and take photographs of the installation to add to a body of work she is generating.

The work also aims to create awareness of the lingering environmental threat of lead contamination around Ithaca Falls, Houle says.

It was the site of a temporary installation by artist Hans Haacke in the Cornell-sponsored “Earth Art” exhibition in 1969. Gorges and waterfalls are identifying features of the regional landscape and are seldom viewed at night, she says.

The dramatic backdrop for “Featherlight” was used by silent filmmakers, including the Wharton brothers a century ago. The Ithaca Gun Co., formerly located above the site, also used hydropower from the falls – and over its 104-year history, gunsmiths shot lead ammunition directly into the falls for testing. (“Featherlight” also was an Ithaca shotgun model.) The surrounding area, contaminated by lead and chemicals used in manufacturing, was designated a Superfund site by the Environmental Protection Agency before it was decontaminated from 2000 to 2004. There are still high levels of toxins there, however, Houle says.

“In the city, there is a proposal for three alternative cleanup processes,” she says. “I’m not doing this to point a finger at anyone – it’s more to bring this into public awareness. I know it will feed into my other work; a public art piece is something I’ve wanted to do for a long time.”

The project is supported by the Cornell Council for the Arts. The student group Friends of the Gorge also will assist the night of the installation. The entrance to Ithaca Falls is at the intersection of Falls and Lake streets. Rain date: Sept. 27. Flood date: Oct. 4.