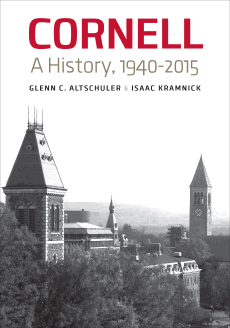 Cornell University’s emergence as a modern research university after World War II and the ongoing challenge to balance its ideals of freedom and responsibility are detailed in a new book by Professors Glenn Altschuler and Isaac Kramnick.

“Cornell: A History, 1940-2015” (Cornell University Press) is a definitive history of the university’s second 75 years. It looks at national events and trends following World War II that reshaped the experience and structure of higher education in the United States, as well as Cornell’s internal evolution, development and how the university shaped its own unique institutional identity.

Altschuler, Ph.D. ’76, is dean of the School of Continuing Education and Summer Sessions at Cornell and the Thomas and Dorothy Litwin Professor of American Studies. Kramnick is the Richard J. Schwartz Professor of Government at Cornell and is a past vice provost for undergraduate education and faculty-elected member of the board of trustees.

The book examines the impact of the 1944 G.I. Bill on enrollment and student experience, Cornell during the Cold War, the civil rights movement, Vietnam, antiapartheid protests, varsity athletics, the women’s movement, the opening of relations with China, and the creation of Cornell Tech in New York City. It details little-known incidents involving the faculty, administration and student life and connects this to the “Cornell idea” of “freedom and responsibility.”

“We assume the audience for the book will be some small fraction of Cornell’s more than 200,000 alumni in all their glorious diversity, as well as current and former faculty and staff and members of the community,” Altschuler and Kramnick said. This semester, they are teaching a four-credit undergraduate course, “Creating Contemporary Cornell,” that covers many of the book’s themes through primary sources such as presidential papers and other university documents.

“We have spent most of our professional lives at Cornell, but we sought to write a history that was neither a rah-rah puff piece or overly critical,” they said. “Our goal was to be as objective as possible in telling the second half of the Cornell story.”

“Cornell: A History” investigates how Cornell constructed its sense of self, and how the concept of the university’s balanced ideals of “freedom and responsibility” – first articulated by professor and historian Carl Becker in 1940 on the university’s 75th anniversary – was used in the decades after World War II as a weapon for change and also to retain the status quo.

The book can be considered a spiritual sequel to the 1962 “A History of Cornell” by Cornell historian and emeritus professor Morris Bishop, which detailed Cornell’s founding and first 75 years.

“Cornell: A History” arrives just as Cornell gears up to celebrate its sesquicentennial, but the authors said that the book’s timing was not planned to coincide with the anniversary. When they first had the idea for the book in 2003, “we had no idea that a sesquicentennial [celebration] was in the offing,” they said, noting that the book remained on the back burner for several years.

“We turned to it in earnest some five years ago and, to our delight, realized that publication would be near the university’s 150th anniversary,” they said, “and we are so pleased to make this contribution to the celebration.”