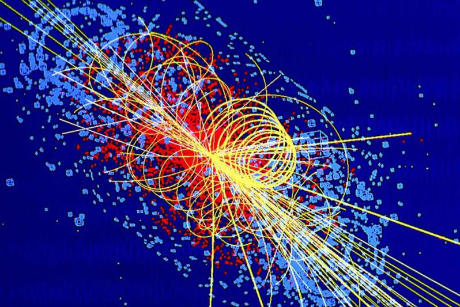 Provided
Csaba Csaki and colleagues theorize a possible solution to a longstanding mystery bolstered by the recent discovery of the Higgs boson – a way to preserve the theory of supersymmetry.

It was a breakthrough with profound implications for the world as we know it: the Higgs boson, the elementary particle that gives all other particles their mass, discovered at the Large Hadron Collider in 2012.

For many scientists, it’s only the beginning. When the LHC fires up again in 2015 at its highest-ever collision energy, theorists like Csaba Csaki, Cornell professor of physics, will be watching.

Earlier this year in Physical Review Letters, Csaki and colleagues theorized a possible solution to a longstanding mystery bolstered by the recent discovery of the Higgs – a way to preserve the theory of supersymmetry, a popular, but experimentally unproven, extension of the Standard Model of particle physics.

Supersymmetry could help explain the unusual properties of the Higgs boson, why the strong and weak interactions of subatomic particles appear to be so different, as well as the origin of dark matter, which makes up a quarter of the universe.

The Standard Model deals with three of nature’s fundamental forces: strong, weak and electromagnetic, which govern the relationships between all the known subatomic particles. Supersymmetry extends the Standard Model by  introducing new particles, called “superpartners”; every observed particle would have a corresponding superpartner, with similar properties to those of the observed particles, except heavier and with different spin values.

Some scientists think supersymmetry ought to be abandoned after the LHC failed to detect any of these superpartners; some of them, like the top quark’s superpartner, the “stop,” is predicted to be so light that the LHC should already have seen it.

In their paper, Csaki and colleagues counter that the particles may be hidden by the noise of other particles formed during the LHC’s unprecedented energy of proton-proton collisions.

Their idea has to do with a concept called R-parity. All observed particles are assumed to have positive R-parity, while the unobserved superpartners would be negative, implying that the superpartners cannot decay to ordinary particles exclusively.

Searching for the superpartners at the LHC, Csaki explained, has largely operated under the assumption that this R-parity is always exactly conserved. Csaki and colleagues pose a scenario in which R-parity is violated, and would result in a series of interactions giving rise to particle decays that would be nearly impossible to detect by the LHC’s current parameters.

“The upshot is that there are ways to hide supersymmetry at the LHC,” Csaki said. “If the signal isn’t very different from the background, it’s very hard to find them. That’s the problem.”

The LHC, when back online next year, is scheduled to run at a collision energy of 14 TeV (teraelectron volts) – about double the energy of previous runs. It could lead to ultimate proof of the theory of supersymmetry, which Csaki deems the “most beautiful” of the Standard Model extensions offered today – but science must make room for all possibilities.

“It’s very possible that supersymmetry is not the right theory, and that’s OK,” he said. “The important thing is to understand the way science works, to try and make the best guesses you can, and the experimentalists go and check it. … We have to make sure we are exploring every corner, and we shouldn’t leave some potentially reasonable theory out where things could be hiding.”