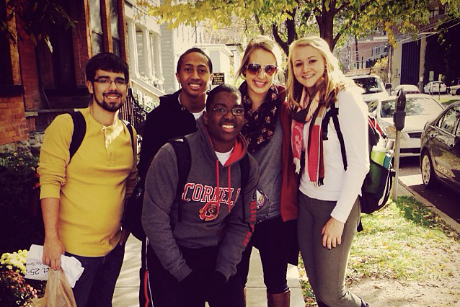 Provided
Students engage with the local community during volunteer sessions as part of Into the Streets, Cornell’s largest philanthropic effort, scheduled this year for Oct. 24-25.

Into the Streets (ITS), Cornell’s largest philanthropic effort, hopes to send more than 1,200 students into the community for the 23rd year, Friday and Saturday, Oct. 24-25, to help local nonprofit agencies and public organizations through volunteer projects. ITS, a student-led program of the Cornell Public Service Center, strives to mobilize students to foster social change, starting in their local Ithaca community. 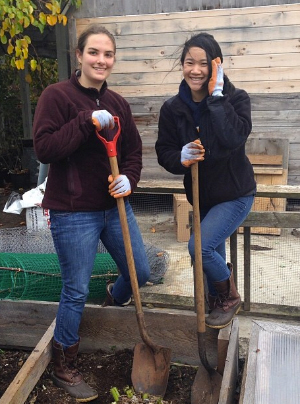 Provided
Students volunteer during Into the Streets in 2013.

“Because this academic year includes Cornell’s sesquicentennial, the Division of Student and Academic Services has chosen to highlight this event as one of its sesquicentennial events,” says Susan Murphy, vice president of student and academic services. “This is one of the many ways as a land-grant university we reach out to local community organizations.”

Often, she added, people who first volunteer through ITS develop strong bonds with the organization and end up working with that organization during the year.

ITS initiatives also sometimes flourish into broader efforts. For example, the ITS volunteers first became involved with the Food Bank of the Southern Tier during an ITS event in 2011. Through that connection, Cornell Hunger Relief, another student program of the Public Service Center, partnered with the Food Bank on a Thanksgiving Turkey Donation Drive to provide turkeys to families in Tompkins and Chemung counties. This year, the group hopes to double the number of turkey donations to combat rising hunger in our community.

“Through my involvement with Into the Streets, I have been able to see Ithaca as more than just where I go to school. Working with and coordinating volunteer events with over 90 local agencies has made me realize how amazing our community is,” says Lara Keskinkaya ’15, co-president of the student board for Into the Streets.

Registration as an individual or as a team is available online. Teams generally work four-hours shifts from noon to 4 p.m., but this can vary depending on the organization.

For more information, contact ITS at intothestreets@cornell.edu by email, or stop by the Public Service Center office at 100/200 Barnes Hall on campus.