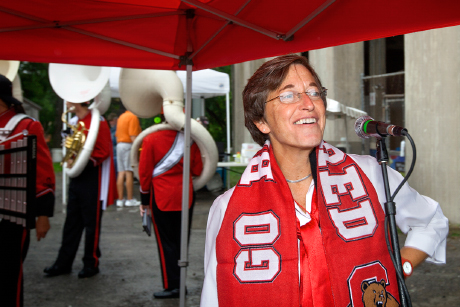 Everything outside the classroom that defines the Cornell student experience – from athletics, to public service, to residential life, to health and well-being – Susan H. Murphy ’73, Ph.D. ’94, has shepherded all of it for more than 20 years.

Vice president for student and academic services since 1994, Murphy has announced she will retire June 30, 2015. She will remain at Cornell in a new role in the Division of Alumni Affairs and Development, assisting with fundraising and alumni engagement, through June 2016.

“I’m not sure I could go from the pace of life that is inherent in being a vice president to doing … nothing,” Murphy said. “I am grateful for the opportunity to work with alumni affairs and development on key fundraising priorities during my transition.” 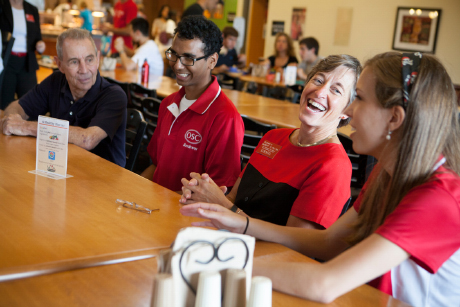 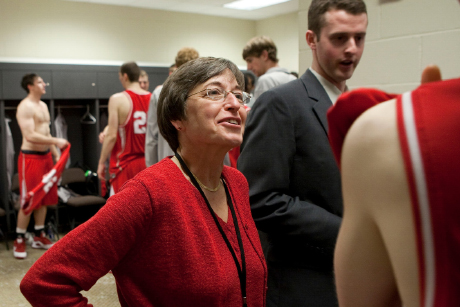 That breakneck pace can be summarized in the seemingly endless list of student services her division oversees. It is also evident in how colleagues describe her. “No one is more devoted to Cornell or works harder on its behalf,” said Kent Hubbell ‘69, the Robert W. and Elizabeth C. Staley Dean of Students. “Her love for Cornell and Cornellians is manifest in all that she does, from breakfast in the morning with alumni, to dinners in the evening with students.”

“Susan Murphy must be counted among Cornell’s most influential leaders,” said Andy Noel, the Meakem*Smith Director of Athletics and Physical Education. “Few have contributed as much devoted service as Susan has during her distinguished tenure. Simply put, Susan is in a class by herself.”

Without hesitation, Murphy says that working with students – and watching them grow, mature and make an impact in the world – has been her favorite part of her job.

“They are so passionate about what they do, and they make a difference,” she said. “They keep us on our toes as staff members. Sometimes their impatience drives me crazy, but at the heart of it, that’s what they’re supposed to be doing.” 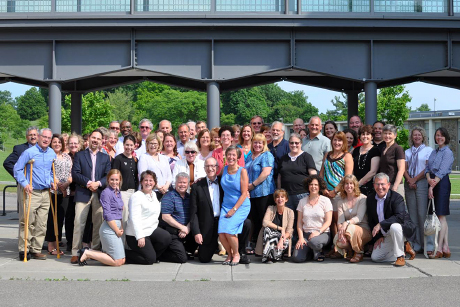 Provided
More than 50 Cornell staff and senior leaders pose at a June 16 gathering to honor Murphy for 20 years of dedicated service as vice president for student and academic services.

Equally rewarding has been working side by side with talented colleagues, Murphy said, together implementing significant changes to the institution over the years.

Among them: moving all first-year students to North Campus and creating the house systems on North and West Campus. She’s also proud of the university’s efforts to promote health and well-being of students – from responding to some of the worst crises imaginable, to becoming a more proactive, caring community.

Dr. Janet Corson-Rikert, executive director of Gannett Health Services and associate vice president for campus health, said of Murphy: “She does her part every day to express what we mean when we talk about Cornell as a caring community: through her leadership of a division dedicated to supporting all aspects of the student experience; through her belief that we can be better and do better by working together to support mental health, end hazing and sexual violence, and build a healthier, more compassionate, more inclusive community; and through her heartfelt words to individuals and to the campus community at times of crisis or grief.” 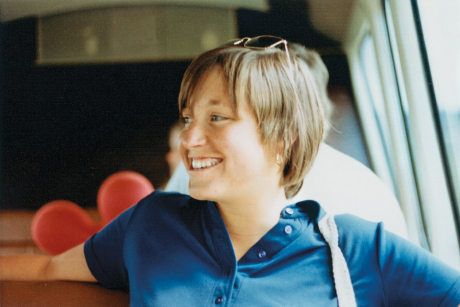 Cornell President Emeritus Hunter Rawlings once said that Murphy has Cornell written on her heart. A 1973 graduate of the College of Arts and Sciences, she returned to Cornell in 1978, at the age of 26, after earning master’s degrees from Montclair State College and Stanford University.

Meeting her late husband, Gerry Thomas, Ph.D. ’78, had a lot to do with why Murphy has stayed as long as she has. He was a supportive and understanding partner, she said, who had his own career at Cornell. The opportunity to earn her doctorate in educational administration was also compelling, but Cornell was always special to her. It’s her alma mater as well as her husband’s and stepdaughters’, all of whom experienced it in their own way, she said.

SAS by the numbers

Before becoming vice president, Murphy worked for 16 years in admissions and financial aid, including nine as dean. Over the years her service and dedication to Cornell have been recognized in many ways, including an endowment in her name for a Cornell Tradition fellowship and the naming of the Court Hall lobby in her honor.

“I have been so fortunate to have Susan on my senior leadership team,” said Cornell President David Skorton. “Her talent, perceptiveness, innovation and judgment are simply unparalleled. Time and again, I have drawn upon her wisdom and insights, not only on topics that directly affect the student experience, but also on issues related to higher education on a national and even global scale. While Cornell will miss her leadership, the university will be fortunate to have the continuing benefit of her broad experience when she transitions to her Alumni Affairs and Development role next July.”

Skorton will launch a national search for Murphy’s successor this fall.

By any measure, she’ll be a hard act to follow. “I can’t believe 37 years have come and gone,” Murphy said. “Time flies … the joys are too numerous to list.”