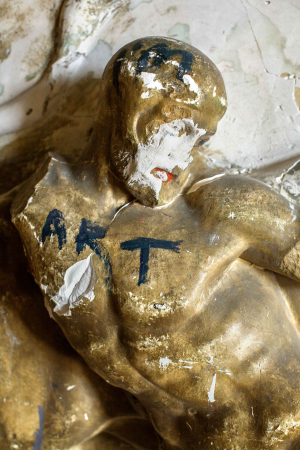 Provided
Plaster cast with a grafitto reading "I am art."

Cornell used to have one of the largest collections of plaster casts in North America. But casts fell out of favor, and the collection deteriorated. “Firing the Canon,” a College of Arts and Sciences sesquicentennial exhibit opening in November, explores how Cornell’s prized collection was “embraced, defaced and dethroned.”

“Firing the Canon” will open Thursday, Nov. 6, at 4:30 p.m. and can be seen weekdays in November and December from 10 a.m. to 4 p.m. or by appointment. About 20 casts from Cornell’s remaining 500 or so pieces will be on display. The exhibit is housed in the Weinhold Chilled Water Plant, 101 Forest Home Drive, next to Beebe Lake. (Enter on the building’s lower level.)

Curators Annetta Alexandridis and Verity Platt, associate professors in the history of art and classics, say they are excited about the juxtaposition of the casts amid the aging mechanics of the Chilled Water Plant. “Both the objects and setting represent earlier stages in Cornell’s history, raising important questions about the preservation and adaptation of the past in the present,” Alexandridis says.

“Firing the Canon” focuses on the rejection and destruction of the casts, setting their historical treatment at Cornell in the context of broader artistic and intellectual movements. “We show the casts as damaged and vandalized with graffiti,” Platt says. “This draws attention to an important – and visually arresting – moment in the life of the object, which can itself be seen as a demonstration of creativity and a source of inspiration.”

The collection of 19th-century casts of Grecian, Roman, Egyptian and medieval pieces was compiled in the 1890s with funds from trustee Henry Sage. Originally displayed in McGraw Hall, the pieces were moved into Goldwin Smith Hall in 1906. But by the middle of the 20th century, Alexandridis said, the casts were seen as secondhand copies of the originals, and most of them were packed away.

But now, Cornell’s copies are often in better shape than the originals, due to weathering, loss and pollution’s effects, making them valuable once again. The ultimate goal of Alexandridis and Platt is to restore as many of the casts as possible, and examples of their efforts will be displayed in “Firing the Canon.” Graduate and undergraduate students have been helping with the restoration; the practical, public-service component of Alexandridis’ Greek & Roman Art & Archaeology course this semester included work on the casts for the exhibit, guided by restorer Kasia Maroney.