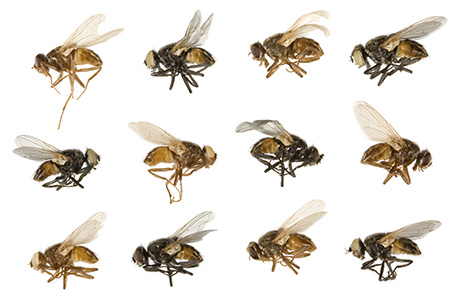 Kent Loeffler/Cornell
These 12 specimens reveal some of the diversity of mutations found in house flies.

Scientists have sequenced the house fly genome for the first time, revealing robust immune genes, as one might expect from an insect that thrives in pathogen-rich dung piles and garbage heaps.

The research, published Oct. 13 in the journal Genome Biology, will increase understanding of house fly genetics and biology and of how flies quickly adapt to resist insecticides, which could lead to novel control methods.

“Anything that comes out of an animal, such as bacteria and viruses, house flies can take from that waste and deposit on your sandwich,” said Jeff Scott, the paper’s lead author and a Cornell professor of entomology. “House flies are the movers of any disgusting pathogenic microorganism you can think of,” Scott added.

The genome, roughly twice the size of the fruit fly’s genome, revealed an expanded number of immune response and defense genes. The researchers also discovered an expansion in the number of cytochrome P450s, which help the flies metabolize environmental toxins. “House flies have a lot more of these enzymes than would be expected based on other insects they are related to,” said Scott, noting that the house fly’s close relative, Glossina morsitans (tsetse fly), has half as many cytochrome P450s. These enzymes are more ancient than insecticides. “We don’t have a clear handle on why house flies need so many,” Scott said.

The M. domestica genome also revealed many genes for chemoreceptors, which detect certain chemical stimuli in the environment. These receptors are important in sensing food and moving in ways critical for survival, allowing house flies to detect a wide variety of different things, Scott said.

“If you think of the genome like a phone book, we now have the phone number of every gene,” said Scott. “We now can study every gene. For any scientific question, we have a highway to get us there.”

One of those questions will focus on controlling house flies and developing new toxins that disrupt the fly’s internal balance by poisoning them or using RNAi to turn off specific genes and killing them, Scott said.

The study’s co-authors include an international team of researchers, including Andrew Clark, Cornell professor of molecular biology and genetics; Wesley Warren, assistant director of comparative genomics at the Genome Institute at Washington University; and Nannan Liu, chair and professor of entomology and plant pathology at Auburn University. The study was funded by the National Institutes of Health and Cornell University Agricultural Experiment Station’s USDA Hatch funds.