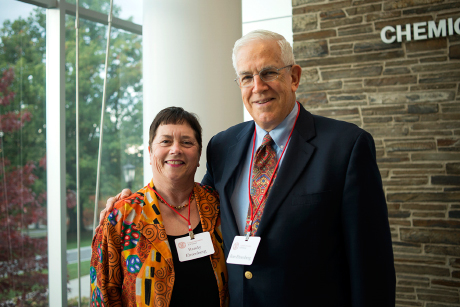 A new professorship honoring the scholarly contributions and distinguished career of professor Ronald G. Ehrenberg has been established at the ILR School.

“This is a fitting tribute for Ron Ehrenberg, who is one of Cornell’s and ILR’s pre-eminent faculty members and widely regarded as the world’s leading expert on the economics of higher education,” Katz said.

The chair is the first endowed position to honor a second-generation member of the ILR faculty.

“ILR has 15 faculty chairs, and a number of those honor the school’s first generation of faculty who arrived here in the 1940s – Maurice Neufeld, Alice Cook, John Windmuller and Jean McKelvey, all of whom I knew, as well as long-time ILR colleague Lois Gray,” Ehrenberg said. “I am overwhelmed by knowing that I am the first member of ILR’s second generation of faculty who is being honored this way and that this honor is occurring while I am still an active faculty member.”

Ehrenberg is the Irving M. Ives Professor of Industrial and Labor Relations and Economics and director of the Cornell Higher Education Research Institute. He has authored or edited 26 books and more than 160 papers and received numerous awards, including the prestigious Jacob Mincer Award from the Society of Labor Economists and the Howard Bowen Distinguished Career Award from the Association for the Study of Higher Education, both for lifetime contributions.

He is a member of the State University of New York Board of Trustees and is a past member of the Cornell Board of Trustees. Ehrenberg served as Cornell’s vice president for academic programs, planning and budgeting; and he is a Stephen H. Weiss Presidential Fellow – the highest award given at the university recognizing excellence in undergraduate teaching. He consults with colleges and universities across the country on issues relating to tuition, financial aid and faculty compensation policies as well as other budgetary and planning issues.

Ehrenberg credits the “extraordinary academic leadership” of ILR deans – Katz, professor David Lipsky and professor Ed Lawler – in supporting the work of faculty through the creation of faculty chairs.

“I know I will not be the last [to be honored with a faculty chair], and that I will be joined by many deserving colleagues in the years ahead,” Ehrenberg said.

Katz said the new chair will be “a great asset in attracting top labor economists” to ILR and the campuswide Department of Economics.