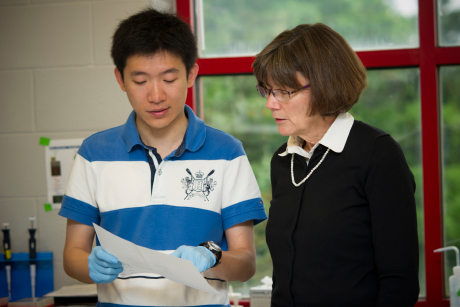 Provided
Postdoctoral associate Lu Huang and Judith Appleton, the Alfred H. Caspary Professor of Immunology at the Baker Institute for Animal Health, discuss data in a study that reveals that white blood cells called eosinophils start a chain reaction that stops the body from launching a chemical attack on parasites.

When parasitic worms invade muscle tissue, white blood cells called eosinophils rush to the scene. A study published in the Journal of Immunology this month reveals that these cells actually start a chain reaction that stops the body from launching a chemical attack on the worm, enabling the parasite to make a home within the muscle.

It’s a paradox that Judith Appleton has been working on for some time: how eosinophils, long thought to defend the body against worm infections, can actually help Trichinella worms gain a foothold. Appleton, vice provost, director of Engaged Cornell and the Alfred H. Caspary Professor of Immunology at the Baker Institute for Animal Health in the College of Veterinary Medicine, says what they didn’t know before was how eosinophils actually sabotage the immune system’s response under certain circumstances.

The study shows that in response to Trichinella infection, eosinophils in mice make a protein called interleukin-10 (IL-10), which stimulates other immune cells to make more of the same protein. IL-10 inhibits an enzyme that would otherwise make nitric oxide (NO), a gas that is toxic to Trichinella worms.

“Although there are reports that eosinophils produce IL-10, its impact on infection has not been revealed previously,” Appleton said. “We found that eosinophil-derived IL-10 has a profound effect on the outcome of Trichinella infection.”

Lu Huang, a postdoctoral associate in David Russell’s laboratory in the College of Veterinary Medicine, conducted the research as part of his doctoral work. Huang said that under most circumstances IL-10 serves as a shutoff tool, ending NO generation and stopping the inflammation process before it injures the host. But Trichinella has apparently found a way to get eosinophils to act against an animal’s or human’s best interest.

“These parasites recruit eosinophils to the muscles at a very early stage of infection, then eosinophils are induced to produce IL-10, and this amplifies the immune response that prevents the parasite from being killed,” Huang said.

“Our work has uncovered a surprising role for eosinophils during infection,” Huang continued. “It may lead us to learn how to design a more effective vaccine against worm infections. Not just Trichinella, but others too.” Diseases caused by parasitic worms like Trichinella are commonly associated with poverty and poor sanitary conditions, Huang said.

The article was highlighted in the “In This Issue” section of the Oct. 15 issue of the Journal of Immunology.

Compounds in worms may lead to parasite treatment (April 2012)