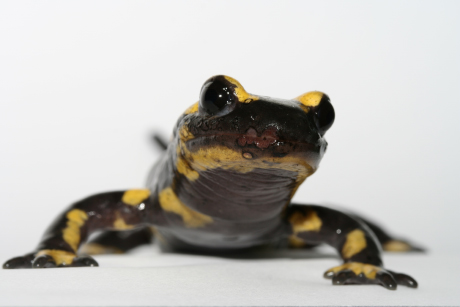 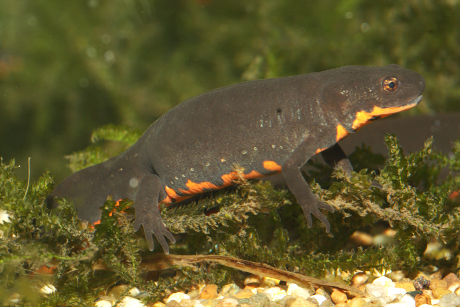 Frank Pasmans
Millions of Chinese fire-bellied newts (Cynops orientalis) are being imported into the U.S. and Europe for the pet market. This species is infected and survives with the pathogen and thus may serve as a vector that spreads the disease. 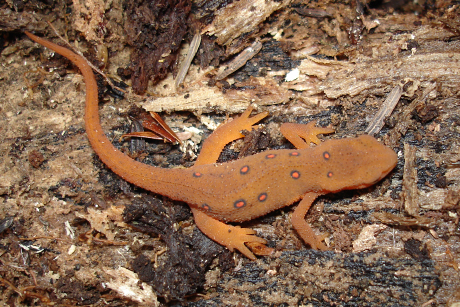 Kelly R. Zamudio
Notopthalmus viridescens, the red-spotted newt is a North American species highly susceptible to B. salamandrivorans, and their populations will be highly impacted if the pathogen invades the continent.

A pathogenic fungus that infects salamanders and newts has jumped out of Southeast Asia through human export of amphibians and has wiped out local populations of European fire salamanders, according to a new study published Oct. 31 in the journal Science.

Though the disease has only appeared in the Netherlands and Belgium, it likely will move to other countries in Europe, according to the report. Amphibians in Thailand, Vietnam and Japan appear immune to the fungus, suggesting it originated in Southeast Asia.

The research team was led by An Martel, who first isolated B. salamandrivorans, and Frank Pasmans, both professors at Ghent University in Belgium.

In this study, Martel and colleagues discovered that B. salamandrivorans specializes in salamanders and newts, but does not sicken frogs, toads and snakelike amphibians called caecilians. Many newts, including the protected great crested newt in the U.K. and many North American species quickly died when experimentally infected.

“If [B. salamandrivorans] gets here we know it’s going to be bad because we have many species and widespread populations of salamanders in the New World that have never experienced this pathogen before and, therefore, have no evolved immunity,” said Zamudio. “What we’ve captured [in this study] is its first steps out of Asia.”

It is likely the fungus traveled from Asia through exports of popular fire belly newts (genus Cynops); more than 2.3 million Chinese fire belly newts were imported into the U.S. alone between 2001 and 2009.

Preventing the spread of this disease will require testing of imported animals, quarantines and better policies surrounding the global amphibian trade, Zamudio said.

“What biologists are seeing is that the more anthropogenically disturbed and globalized our world becomes, the more our biodiversity will be challenged by new diseases,” Zamudio said.

B. salamandrivorans is a sister fungus to another pathogen, Batrachochytrium dendrobatidis (Bd), which has infected more than 350 species globally, leading to large declines of frogs, and has caused extinctions of a number of frog populations since the 1980s.

While Bd is millions of years old, B. salamandrivorans appears to be even older in its endemic areas, according to the study.