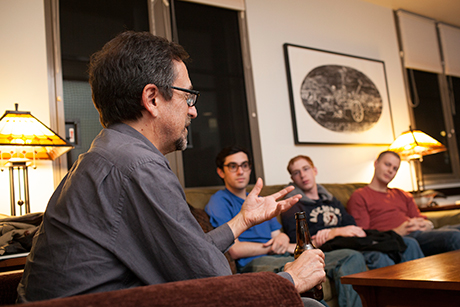 Despite being an environmental advocate and journalist for more than 30 years, former New York Times reporter Andrew Revkin has yet to find a way to eliminate his carbon footprint. Neither will most Americans anytime soon, said the Andrew D. White Professor-at Large during his talk with students at William Keeton House Oct. 30.

Humanity’s best bet for climate change will be to focus on adaptability and preparedness, Revkin said. Though significant challenges lay ahead, a focus on adjustable agricultural practices and developing sustainable energy sources will prevent major catastrophe in the near future, he said.

Revkin addressed public opinion and the media, saying that while some environmental factions have criticized the media for not covering important issues on climate change, he believes this is overstated. More coverage would not make us “de-carbonize,” especially here in the United States where our wealth and technology insulate us – to a certain degree – from most climate hazards.

But the picture is different in other world regions: “We have crop insurance; most big chunks of the world don’t even have crop insurance. A farmer here can survive one or two bad seasons and still be economically viable, whereas a farmer in sub-Saharan Africa … may be in peril of not even surviving if their crops fail,” he said.

The exacerbation of global inequities remains a concern for Revkin, even as forecasts remain unclear on exactly how climates will change in particular areas of the world.

One such region is Africa’s midsection, just below the Sahara Desert, where competing scientific models offer immensely divergent predictions for the near future, he said. Yet the primary challenge lies not in determining how climate change will manifest itself in the coming years, but how well such an impoverished and vulnerable part of the world will be able to adapt – whatever the changes may be.

The ways in which some developed countries have responded to this speculation signal a subtle foreshadowing of the impact climate change might have on global relations, given current resource distributions, Revkin said.

He cited Japan and the Republic of Korea as examples of developed nations that have been ramping up their land and energy investments in sub-Saharan Africa to compensate for their lack of natural and agricultural resources. Thus far these partnerships have proven to be mutually beneficial, if not desperately needed in some regions; however the big picture foretells of a future in which the control of wealth – natural or otherwise – is further consolidated in the hands of industrialized nations.

Still, Revkin believes humanity’s future will not be as gloomy as the media tends to illustrate. “One conclusion I’ve come to is that we tend to pay most attention to the more dire messaging around some of these issues, but we’re probably going to do reasonably well. That doesn’t mean that centuries of sea-level rise is a good thing, or letting greenhouse gases build in the atmosphere is a good thing, but it means that we probably have a greater capacity to ride this out if people are engaged in making sure communities aren’t as vulnerable to climate hazards and working on energy innovations,” he said. “If we keep working on these things we have a good chance of coming out of this century okay.”

Ending his talk on a lighter note, Revkin performed the song “Liberated Carbon” from his 2013 album, “A Very Fine Line.”