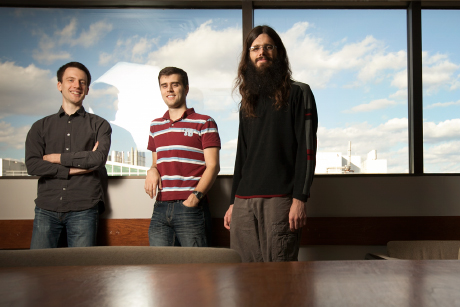 Similar in premise to many other science fiction films, something sets “Interstellar” apart: Many of the images are – for the most part – scientifically accurate, based on lensing calculations that show what black holes or wormholes look like.

Three graduate students – Andy Bohn, François Hébert and William Throwe – are doing related research at Cornell. Just last week, the students published their research about binary black holes on ArXiv, an online repository for scientific papers founded by Cornell physicist Paul Ginsparg. The paper, “What Would a Binary Black Hole Merger Look Like?” immediately garnered the attention of publications such as Nature.

In the plot of “Interstellar,”Earth is dying; to save the human race, astronauts and scientists search for a new planet via a wormhole, essentially a shortcut through space.

Producers of “Interstellar” sought to make visual representations of the wormhole as accurate as possible. They worked closely with Kip Thorne, a theoretical physicist at Caltech and executive producer for the film, who gave the special effects team the scientific equations to create the wormhole. Thorne’s involvement in this gravitational lensing project led him to talk with the three Cornell grad students.

The research of Bohn, Hébert and Throwe “on visualizing colliding black holes by gravitational lensing is very interesting and important,” Thorne said.

Wormholes do not actually exist in space, but black holes do, Throwe said, so the students created two short videos for Thorne, which showed what moving by a black hole in space would look like. It would be impossible to move through an actual black hole, they said, because the pull of gravity would tear a person apart.

“We know [interstellar travel through wormholes is] kind of crazy, but it makes a good story,” Throwe said.

Thorne used the students’ videos to help explain to the special effects team what kinds of information would be needed to make the visualizations believable.

“It’s a really small part of what they were doing, but it was really fun for us to do,” Bohn said.

“The idea that you’re going to be one of the first people to look at what a merging pair of black holes would look like is a good incentive to keep going,” Hébert said.

Astronomers haven’t been able to visually observe black holes because nothing can escape from them, not even light or radiation. They can only be studied by noting their effects on nearby objects. That’s what makes this recent research so important, because it creates a new visualization.

The team is excited about their research and hopes it will inspire even more studies.

“It will be a stepping-stone for us to look into more complicated problems,” Bohn said.

To find out more about their research, click here.

Anna Carmichael ’18 is a communications intern with the College of Arts and Sciences.