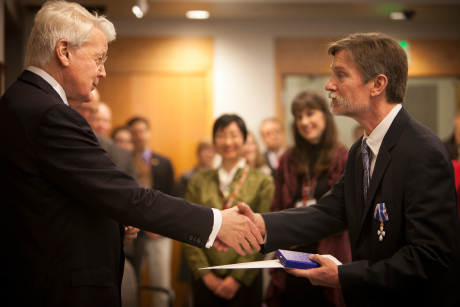 Jason Koski/University Photography
Iceland President Grímsson, left, awards Patrick Stevens, curator of the Fiske Icelandic Collection, with the Order of the Falcon during a ceremony Nov. 21 at Olin Library. 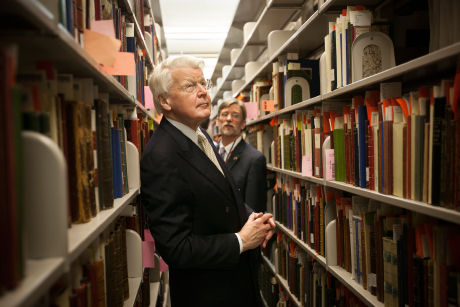 Jason Koski/University Photography
Grímsson and Stevens in the vaults of the Division of Rare and Manuscript Collections, looking at volumes in the Fiske Icelandic Collection.

During his two-day visit to campus, the president of Iceland, Ólafur Ragnar Grímsson, recognized a librarian with one of his country’s highest honors.

Patrick Stevens, curator of the Fiske Icelandic Collection in the Cornell University Library’s Division of Rare and Manuscript Collections, was awarded the Order of the Falcon during a ceremony Nov. 21 at Olin Library.

Stevens received the honor in recognition of his work as curator of the Fiske Icelandic Collection, the largest repository in North America for the study of Icelandic and Old Norse literature and civilization, and one of the three largest collections of its kind in the world. It includes ancient and modern Icelandic literature.

“I hope that in this small ceremony you will sense the gratitude from the people of Iceland, the honor which the republic wants to show you, and by that, thanking you for your dedication, for your loyalty, for your leadership in preserving the Icelandic literary and history collection, and also for making it new every year by adding new books,” Grímsson said to Stevens, before formally presenting the Order of the Falcon medal in Icelandic.

“The order for me represents first of all the long and amicable relationship between Iceland and Cornell University,” said Stevens.

Daniel Willard Fiske (1831-1904), “a lifelong friend to Iceland” and Cornell’s first university librarian, began his collection before the university was founded and bequeathed approximately 8,600 volumes to Cornell, said Stevens. Halldór Hermannsson, the collection’s first curator, more than doubled the holdings during his 43-year tenure.

Grímsson said that even as a young boy in a fishing village in the Westfjords of Iceland in the late 1940s and early 1950s, he was aware of the Cornell library in Ithaca and the Fiske Collection. The collection was known for its medieval literature and had cultural significance within Iceland’s independence movement, he added. Iceland gained independence from Denmark in 1944.

Prior to the Order of the Falcon ceremony, Stevens shared some of the collection’s prized volumes with Grímsson. These included: