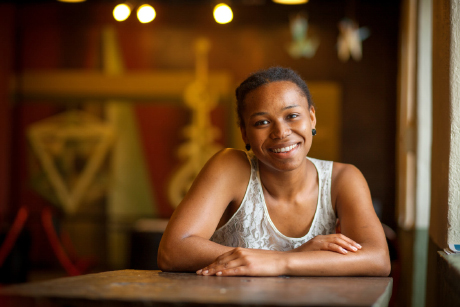 Lindsay France/University Photography
Rachel Harmon ’15 will study at the University of Oxford as a 2015 Rhodes scholar.

Rachel Harmon ’15 is the recipient of a 2015 Rhodes Scholarship, an international postgraduate award widely regarded as the world’s most prestigious scholarship.

Harmon is one of 32 students selected from a pool of 900 college and university applicants to receive two years of study at the University of Oxford, England, where she will pursue a master’s degree in evidence-based social intervention and policy evaluation.

Rhodes scholars are chosen based on academic achievements, their “commitment to the common good” and leadership potential.

“The Rhodes Scholarship is one of the most extraordinary opportunities available to a soon-to-be college graduate like myself, not only because of the incredible academic and intellectual resources available at Oxford, but also because of the vibrant community that one becomes a part of upon selection,” Harmon said.

“I have been motivated by a desire to further social justice for about as long as I can remember, and the Rhodes Scholarship was intended to facilitate just that – the development of global leaders to contribute to the greater good.”

While studying at the ILR School, Harmon has been involved in research and service activities and has earned academic honors. She is a Public Service Center Scholar, a Mellon Mays Undergraduate Fellow, a Rawlings Presidential Research Scholar, an ILR Irving Ives Award winner and a teaching assistant in the Cornell Prison Education Program.

Harmon worked as a Southern Education Leadership Initiative fellow of the Southern Education Foundation in summer 2014, researching the impact of school finance trends with Better Schools, Better Jobs in Jackson, Mississippi. In fall 2013 she conducted independent research in rural Uganda on participation in local governance, interviewing more than 100 residents in five villages.

Her honors thesis will compare labor and community initiatives for low-income families in Mississippi, a region that has interested her since she taught there with the America Reads program the year after high school. In the summer of 2012, she was a research fellow with ILR’s Worker Institute and served as a research assistant for Restaurant Opportunity Center United.

Cornell’s other current Rhodes scholars are Kit Dobyns ’13 and Daniel Young ’13, both of whom are in their second year of the scholarship. Students interested in applying for the Rhodes Scholarship can contact Beth Fiori, Cornell fellowships coordinator.

Joe Zappala is assistant dean of communications and marketing at the ILR School.