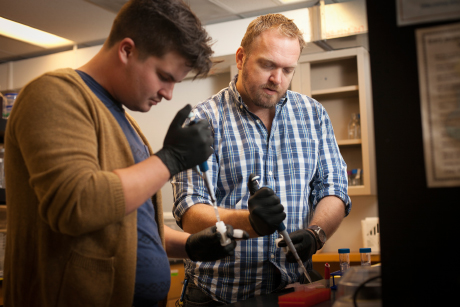 Since 2013, millions of sea stars native to the Pacific coast of North America from Baja California to southern Alaska have succumbed to a mysterious wasting disease in which their limbs pull away from their bodies and their organs exude through their skin; a disease researchers say could trigger an unprecedented ecological upheaval under the waves.

Now, a researcher in Cornell’s College of Agriculture and Life Sciences has identified the deadly culprit as the Sea Star Associated Densovirus (SSaDV), a type of parvovirus commonly found in invertebrates. In a study published Nov. 17 in the Proceedings of the National Academy of Sciences, Ian Hewson, associate professor of microbiology and lead author of the study, and colleagues present a genomic analysis of the newly discovered virus prevalent in symptomatic sea stars.

“There are 10 million viruses in a drop of seawater, so discovering the virus associated with a marine disease can be like looking for a needle in a haystack,” says Hewson. “Not only is this an important discovery of a virus involved in a mass mortality of marine invertebrates, but this is also the first virus described in a sea star.”

Hewson suggests that the virus has been smoldering at a low level for many years. It was present in museum samples of sea stars collected in 1942, 1980, 1987 and 1991, and may have risen to epidemic levels in the last few years due to sea star overpopulation, environmental changes, or mutation of the virus. Sea water, plankton, sediments and water filters from public aquaria, sea urchins and brittle stars also harbored the virus.

The research lays the groundwork for understanding how the virus kills sea stars and what triggers outbreaks. The stakes are high, according to Drew Harvell, a Cornell professor of ecology and evolutionary biology and a co-author on the paper. As voracious predators on the ocean floor, sea stars are ‘keystone’ species that have a large role in maintaining diversity in their ecosystem.

“It’s the experiment of the century for marine ecologists,” said Harvell. “It is happening at such a large scale to the most important predators of the tidal and sub-tidal zones. Their disappearance is an experiment in ecological upheaval the likes of which we’ve never seen.”

“The recent outbreak of sea star wasting disease on the U.S. West Coast has been a concern for coastal residents and marine ecologists,” said David Garrison, program director in the NSF’s Division of Ocean Sciences. “This study, supported as a rapid response award, has made a significant contribution to understanding the disease.”

Amanda Garris is the executive editor of periodiCALS magazine.