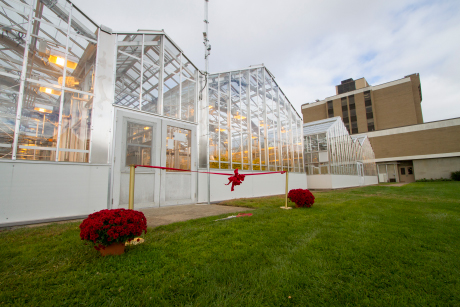 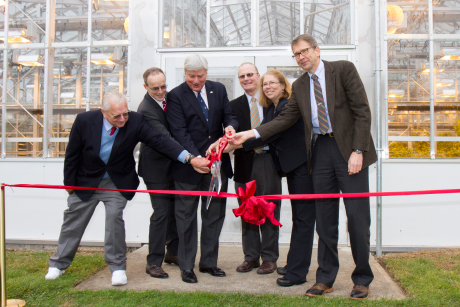 Nozzolio (R-54th Dist.) credited the agricultural research conducted at NYSAES with being an economic driver for the region as well as the entire state.

The project, started in May 2013, reconstructed 21,000 square feet of greenhouses that were built in the mid-1950s through the early 1970s. The greenhouses received new glass, increased eave heights, improved lighting, retractable shade curtains, upgraded cooling, and climate controls that optimize energy efficiency.

“This modernized facility provides an ideal site for Cornell faculty and students to carry out the three-part mission of CALS: teaching, extension and research in service to the citizens of New York,” Jan P. Nyrop, senior associate dean of the College of Agriculture and Life Sciences, told an audience of 100 people who attended the ceremony.

“A very significant component of research at NYSAES involves crop plants that are vital to New York agriculture and relies on having excellent greenhouse facilities,” said Thomas Burr, the Goichman Family Director of NYSAES. “The new greenhouses, made possible with state funding that was secured by Sen. Nozzolio, will provide enhanced research opportunities throughout the year resulting in greater productivity and ability to answer questions that have direct impact on the prosperity of New York agriculture.”

Barton Laboratory Greenhouse’s upgrade is part of a broader effort – called for in the college’s master plan – to eliminate or replace older, energy-inefficient greenhouses with more sustainable, state-of-the-art structures. This effort will generate substantial long-term savings in utilities while also providing faculty, staff and students with modern, spacious and efficient greenhouse facilities in which to conduct their research, Nyrop said.

Maintaining cutting-edge facilities is also a key focus of the experiment station’s current strategic planning process, as well as the recently launched School of Integrative Plant Science, which united all plant and soil science programming in the College of Agriculture and Life Sciences under a single administrative structure.

The college is also constructing a new greenhouse at the Guterman complex on the Ithaca campus and is replacing the conservatory greenhouse adjacent to the Plant Science Building.

Geneva greenhouses to get $4.7 million upgrade