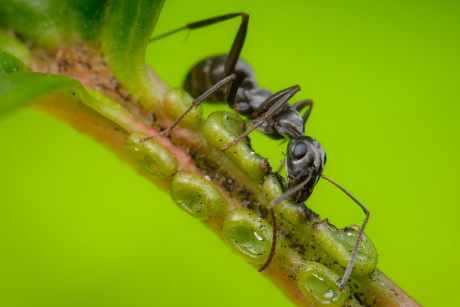 Ellen Woods
An ant drinks nectar from an extrafloral nectary on a leaf of Viburnum sargentii at Cornell Plantations.

Some plants form into new species with a little help from their friends, according to Cornell research published Oct. 27 in the Proceedings of the National Academy of Sciences.

The researchers conducted a global analysis of all vascular plant families, more than 100 of which have evolved sugary nectar-secreting glands that attract and feed protective animals, such as ants. The study reports that plant groups with nectar glands contain greater numbers of species over time than groups without the glands.

“Why some groups of species evolve to be more diverse than others is one of the great mysteries in biology,” said Anurag Agrawal, professor of ecology and evolutionary biology and co-author of the paper. Marjorie Weber, Ph.D. ’14, formerly of Agrawal’s lab and now a postdoctoral fellow at the University of California, Davis, is lead author.

“By attracting bodyguards to plants, these glands can increase plant success in a variety of habitats by protecting them from local pests,” Weber said. “This in turn may increase plant survival in remote places, decrease risk of local extinction or both.”

Also, when ants, for example, defend plants against pests, the plants may apply the energy and resources that would otherwise have been apportioned to defense to the development of new traits. 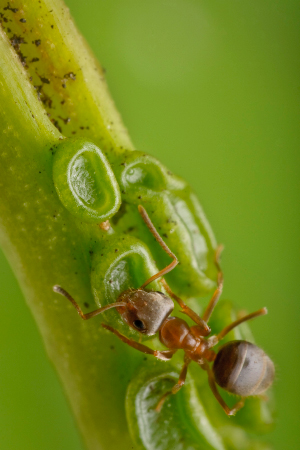 These benefits may make these plants more successful at migrating to new places, where they can diversify into new species over time.

Nectar glands have evolved independently more than 100 times over Earth’s history, which gave the researchers many opportunities for analyses of these mechanisms in different plant families.

The analysis “was possible because of the DNA sequence data available for many plant species,” Agrawal said. The researchers used the data for computer modeling of phylogenies (branching diagrams that depict the evolutionary relatedness among groups of organisms), and to calculate numbers of new species that occur per million years.

Biologists have long speculated which traits may have been “key innovations” that have led to highly diverse groups of species, Agrawal said. In animals it has been suspected that flight played a similar key role in the diversification of birds, bats and insects. For plant species, defense against insect pests and the formation of mutually beneficial relationships with predators was a critical evolutionary leap, he said.

The study was funded by the National Science Foundation, the John Templeton Foundation and the Society for the Study of Evolution.