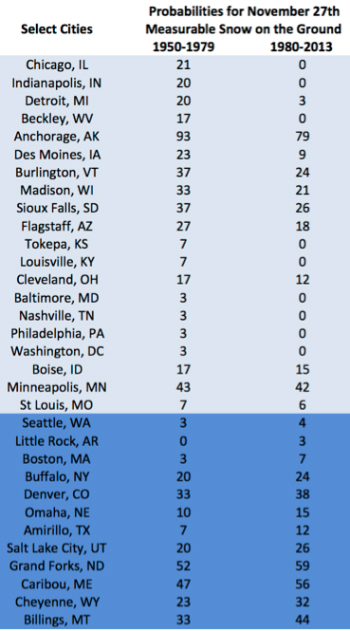 If you’re dreaming of a white Thanksgiving, dream on.

For winter-hardened places like Chicago, Indianapolis, Detroit and Beckley, West Virginia, the chance of measureable snow on the ground for Nov. 27 – this year’s date for Thanksgiving – is practically nil.

In Anchorage, Alaska, the chance of measureable snow on Nov. 27 fell dramatically between 1950-79 and 1980-2013, according to data examined by the National Oceanic and Atmospheric Administration’s Northeast Regional Climate Center at Cornell. On the date of Nov. 27, from 1950 to 1979, there was snow on the ground in all but two of the years in which climate data were recorded. For the latter three decades, the probability of at least an inch of snow dropped to 79 percent.

Des Moines, Iowa, which once held an ample chance for the white stuff on Nov. 27 at 23 percent, holds a 9 percent probability in this most-recent three-decade period. Snowy Burlington, Vermont, dropped from 37 to 24 percent; Madison, Wisconsin, went from 33 to 21 percent; and Sioux Falls, South Dakota, fell from 37 to 26 percent.

Chances are in this new period that precipitation that once fell as snow, falls as rain. While Thanksgiving occurs late in autumn, these statistics support the idea of a warming globe, says Arthur T. DeGaetano, Cornell professor of earth and atmospheric sciences and director of the Northeast Regional Climate Center.

For Ithaca, New York, home to the climate center, the chances of a white Thanksgiving have dropped from 27 to 18 percent.

In the past three decades, some places have seen an increase in probability of measureable snow. Buffalo, New York, went from 20 to 24 percent; Denver leapt from 33 to 38 percent; Cheyenne, Wyoming, climbed from 23 to 32 percent; and Grand Forks, North Dakota, jumped from 52 to 59 percent.

DeGaetano, a fellow at Cornell’s Atkinson Center for a Sustainable Future, explains these climbs as weather-pattern clusters in the High Plains, the Midwest and the Northeast. “For these places, it is one or two more storms in the latter 30-year period, resulting in more snow on the ground for Nov. 27,” he said.