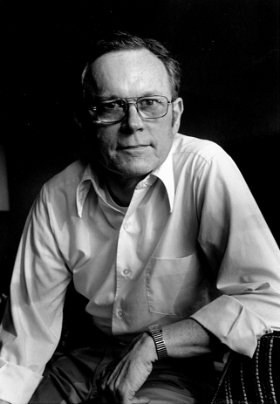 John Marcham ’50, a journalist and longtime editor of the Cornell Alumni News, died Dec. 4 at age 87.

Marcham, of Ithaca, was editor of the Cornell Alumni News (now called Cornell Alumni Magazine) from 1961-91, except for 1964-67, when he served as Cornell’s director of university relations.

He is survived by his wife of 63 years, Jane Haskins Marcham ’51. Marcham was the son of Fred Marcham, Ph.D. ’26, a well-known Cornell professor of history who taught for nearly seven decades.

Marcham was an Ithaca High School graduate; he served in the Army during World War II (where he helped produce a newspaper aboard his troopship) and returned to Ithaca after the war to complete his Cornell degree. Marcham served as editor in chief of The Cornell Daily Sun.

He worked as a writer at Life magazine for two years; with his wife, he bought and published a Connecticut weekly newspaper for a year, and eventually returned to Ithaca, where he worked as city editor of The Ithaca Journal before helming the Cornell Alumni News for almost 30 years.

“John Marcham set a high standard,” said Jim Roberts ’71, who served as CAM’s editor and publisher from 2000-14, retiring earlier this year. “He loved Cornell, but he also believed that the magazine should always be accurate and objective in its reporting, even if that meant that it would sometimes be at odds with the administration or startle its alumni readership.

“This was especially true during the ’60s, when Cornell – and the country – were going through difficult times, but it was a characteristic of his entire tenure. I benefited greatly from the many discussions I had with John, and I learned a great deal from him. He was humble and very modest about his work, but he had a significant impact on an entire generation of Cornellians.”

Locally, Marcham was founding president of the County Council for Equality, a board member for Watermargin, Book & Bowl, and the Cornell Railroad Historical Society. He served as a member of the Tompkins County Board of Representatives for nine years and was officer of the county’s Economic Opportunity Council for 15 years. He also served as president, campaign chair and a sustaining member of the DeWitt Historical Society and the History Center in Tompkins County.

In addition to his wife, Marcham is survived by their three children and two grandchildren.

Calling hours will be from 2 to 4 p.m. Thursday, Dec. 11, at Bangs Funeral Home in Ithaca. In place of flowers, the family suggests a donation in Marcham’s name to the History Center in Tompkins County.