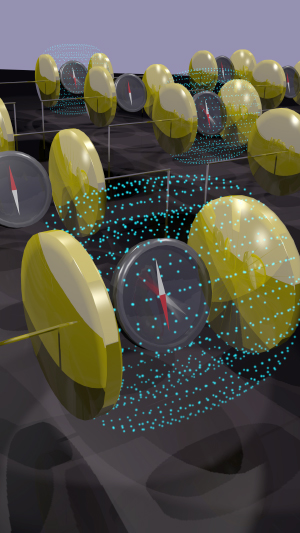 To encode data, today’s computer memory technology uses electric currents – a major limiting factor for reliability and shrinkability, and the source of significant power consumption. If data could instead be encoded without current – for example, by an electric field applied across an insulator – it would require much less energy, and make things like low-power, instant-on computing a ubiquitous reality.

A team led by postdoctoral associate John Heron, who works jointly with Darrell Schlom, the Herbert Fisk Johnson Professor of Industrial Chemistry in the Department of Materials Science and Engineering, and Dan Ralph, the F.R. Newman Professor of Physics in the College of Arts and Sciences, has made a breakthrough in that direction with a room-temperature magnetoelectric memory device. Equivalent to one computer bit, it exhibits the holy grail of next-generation nonvolatile memory: magnetic switchability, in two steps, with nothing but an electric field. Their results were published online Dec. 17 in Nature, along with an associated “News and Views” article.

“The advantage here is low energy consumption,” Heron said. “It requires a low voltage, without current, to switch it. Devices that use currents consume more energy and dissipate a significant amount of that energy in the form of heat. That is what’s heating up your computer and draining your batteries.”

The researchers made their device out of a compound called bismuth ferrite, a favorite among materials mavens for a spectacularly rare trait: It’s both magnetic – like a fridge magnet, it has its own, permanent local magnetic field – and also ferroelectric, meaning it’s always electrically polarized, and that polarization can be switched by applying an electric field. Such so-called ferroic materials are typically one or the other, rarely both, as the mechanisms that drive the two phenomena usually fight each other.

This combination makes it a “multiferroic” material, a class of compounds that has enjoyed a buzz over the last decade or so. Paper co-author Ramamoorthy Ramesh, Heron’s Ph.D. adviser at University of California, Berkeley, first showed in 2003 that bismuth ferrite can be grown as extremely thin films and can exhibit enhanced properties compared to bulk counterparts, igniting its relevance for next-generation electronics.

Because it’s multiferroic, bismuth ferrite can be used for nonvolatile memory devices with relatively simple geometries. The best part is it works at room temperature; other scientists, including Schlom’s group, have demonstrated similar results with competing materials, but at unimaginably cold temperatures, like 4 Kelvin (-452 Fahrenheit) – not exactly primed for industry. “The physics has been exciting, but the practicality has been absent,” Schlom said.

A key breakthrough by this team was theorizing, and experimentally realizing, the kinetics of the switching in the bismuth ferrite device. They found that the switching happens in two distinct steps. One-step switching wouldn’t have worked, and for that reason theorists had previously thought what they have achieved was impossible, Schlom said. But since the switching occurs in two steps, bismuth ferrite is technologically relevant.

The multiferroic device also seems to require an order of magnitude lower energy than its chief competitor, a phenomenon called spin transfer torque, which Ralph also studies, and that harnesses different physics for magnetic switching. Spin transfer torque is already used commercially but in only limited applications.

They have some work to do; for one thing they made just a single device, and computer memory involves billions of arrays of such devices. They need to ramp up its durability, too. But for now, proving the concept is a major leap in the right direction.

“Ever since multiferroics came back to life around 2000, achieving electrical control of magnetism at room temperature has been the goal,” Schlom said.

The paper, “Deterministic Switching of Ferromagnetism at Room Temperature Using an Electric Field,” includes collaborators from University of Connecticut; University of California, Berkeley; Tsinghua University; and Swiss Federal Institute of Technology in Zurich. The research was supported by the National Science Foundation and the Kavli Institute at Cornell for Nanoscale Science, of which Ralph and Schlom are both members.