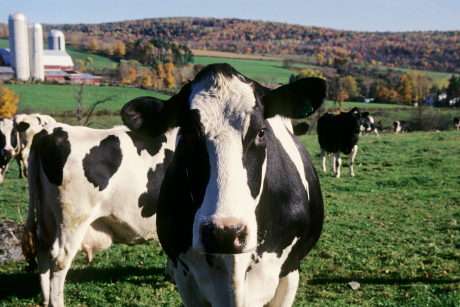 A team of researchers, led by Cornell scientists, will explore basic research questions and real-world issues surrounding the transmission of two important agricultural diseases, bovine tuberculosis and Johne’s disease, thanks to a federal grant.

The team received a four-year, $1.665 million grant and will use new techniques to better understand the ecology and evolution of these mycobacterial diseases that mostly affect cows, but also have links to wildlife.

The grant is jointly funded by the National Science Foundation, the National Institutes of Health and the United States Department of Agriculture’s Ecology and Evolution of Infectious Diseases program, in collaboration with the United Kingdom’s Biotechnology and Biological Sciences Research Council.

The research team will explore the transmission of bovine tuberculosis and Johne’s disease through whole genomic sequences of these bacteria to understand their evolutionary histories. These tools and data will be combined with epidemiological studies to better understand how transmission occurs.

“We are investigating these diseases that are important for agriculture and human health,” said Yrjo Grohn, the project’s principal investigator and the James Law Professor of Epidemiology in the Department of Population Medicine and Diagnostic Sciences at Cornell’s College of Veterinary Medicine. “We are studying these diseases in agricultural systems where we also consider real-world economic consequences.”

Johne’s disease, caused by Mycobacterium avium ssp. paratuberculosis, is a contagious disease of ruminants characterized by rapid weight loss and diarrhea. There is speculation, though controversial, of a link between Johne’s disease in ruminants and Crohn’s disease in humans.

“Johne’s disease is almost endemic in many U.S. [cattle] herds,” said Grohn. “We have been studying and developing models to try and control it for many years.”

Also, bovine tuberculosis (Mycobacterium bovis), which can infect humans, has become epidemic in areas of Michigan, where deer carry and spread it to cattle, and in other parts of the country where it is believed infected cattle have come to the U.S. from Mexico.

Studying bovine tuberculosis “raises the questions of what are the roles of wildlife and animal movement” in disease transmission, Grohn said.

In the U.K., for example, bovine TB is carried by badgers, a protected species that brings politics into preventing disease spread.

The group also hopes to use computer models to investigate different strains of infectious diseases, along with ecological and agricultural factors. The team seeks to better understand the roles of wildlife in maintaining bovine TB in the U.S. and the U.K., environment in the spread on Johne’s disease in dairy herds, and economics in transmission and infection control.