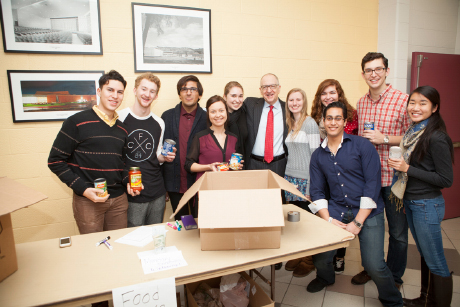 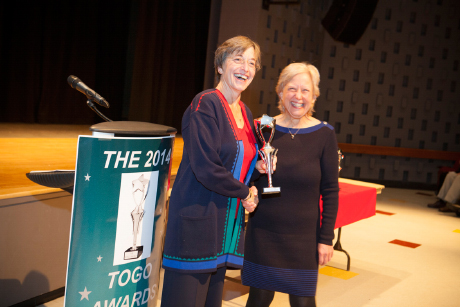 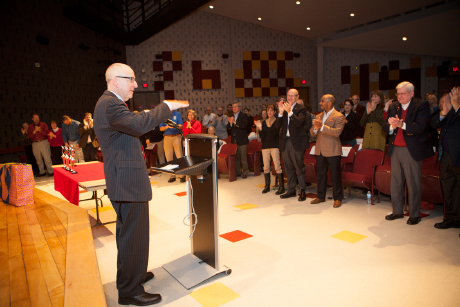 In a tribute to President David Skorton and Professor Robin Davisson, a donation in their names to support 10 years of United Way of Tompkins County’s Summers of Service scholarships will be made to the Cornell Student United Way Campaign beginning in 2015.

Vice President for University Relations Joel Malina, whose division will fund the contribution, made the announcement Dec. 6 at the Town-Gown (TOGO) Awards celebration. The scholarships will be awarded to local high school students with an interest in public engagement, Malina told an audience of 200 community and campus leaders at Ithaca High School.

Visibly moved by this tribute, Skorton said: “Everywhere I’ve lived, the United Way and the multiplicity of agencies it represents have been absolutely critical.”

Earlier, he had acknowledged that this was his last TOGO Award celebration. “We have been through a lot of challenges together,” Skorton said, referring to the economic downturn and, more recently, to the tragedies during Thanksgiving break. “Communities big and small never, ever, run out of difficulties to deal with, unfortunately, and nonprofits and businesses and the spirit of this community are the glue that keeps everything together.”

The scholarship announcement capped the TOGO Awards, which celebrate partnerships between local organizations and the university.

“It is difficult to think of work that is more important, and more pressing, than working for the poor and hungry among us in Tompkins County, here and now,” Malina said. He also thanked the Meinig Family Cornell National Scholars who attended the TOGO awards to collect food for local food pantries.

John Gutenberger, senior adviser to community relations, recognized six area residents leaving public office or high-profile positions: Terry Byrnes, founder and retiring board president of the Ithaca Public Education Initiative; Audrey Cooper, who has led numerous human-service agencies in Ithaca; Mimi Melegrito, who worked at the Ithaca Youth Bureau for more than 30 years; Jean McPheeters, recently retired from the Tompkins County Chamber of Commerce, where she served as president for 14 years; Nancy Potter, who has worked more than 30 years with Cornell Cooperative Extension of Tompkins County; and Aurora Valenti, who brought a customer-service orientation to her work as county clerk, clerk of the courts and director of the Department of Motor Vehicles in Ithaca.

The annual TOGO Awards, which began in 2011, are held on the first Saturday morning of December, and alternate between community and campus venues.