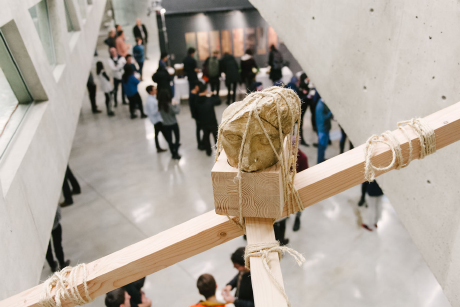 Andrew Fu '15
A sculpture by Elena Toumayan, B.Arch. '15, was part of a Milstein Dome exhibition by Aleksandr Mergold’s students and displayed during the “Spolia” symposium. 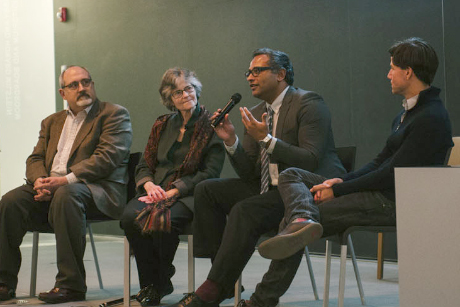 From the multiple lives of Roman columns to present-day New York Harbor, the ancient phenomenon of “spolia” continues to have relevance to efforts to forge more sustainable and resilient human patterns of habitation. Scholars and professionals explored the practice at a recent symposium, “Spolia: Histories, Spaces, and Processes of Adaptive Reuse,” presented by the College of Architecture, Art and Planning (AAP) Nov. 14-15 in Milstein Hall.

Sites, buildings and structures of antiquity were repurposed into new edifices, facilitating the production of new forms while claiming the cultural and political heritage of the donor structures.

The practice dates “back to ancient Egypt and perhaps beyond,” Mergold says. “It’s extremely pragmatic and symbolically charged. More than recycling, spolia also has social, cultural and even political dimensions. We think of it as an archaic practice, yet we also think that we have just invented recycling, life hacking and adaptive reuse. In fact, it has been practiced for millennia.”

A keynote by Kate Orff, founder of landscape and urban design firm Scape, focused on the first phase of Scape’s Living Breakwaters project, recently launched to rehabilitate and protect the southern coast of Staten Island.

Funded in part by the U.S. Department of Housing and Urban Development’s “Rebuild by Design” competition, the massive build was described by Orff as a collaborative effort that includes designers, federal and local government agencies, community organizations and schools, scientists and engineers. And, perhaps most exciting for Orff, Living Breakwaters marks the beginning of the Billion Oyster Project – a 20-year plan to restore a thriving oyster population to New York Harbor. Orff also designed the green roof on Milstein Hall, the college’s Rem Koolhaas/OMA-designed building that opened in 2011.

The symposium featured participants describing the connection between spolia and currently emerging concerns about environmental degradation – and the resulting interest in adaptive reuse and recycling, the “slow” movement and ongoing historic preservation debates.

“The speakers did an incredible job illuminating the complicated but productive relationships embedded in spolia in order to better understand its potential in contemporary design practice, art, history and preservation, material science and formation of culture,” Mergold says. “And what was really great to see were the multiple conversations happening between various participants, faculty and students.”

An exhibition on display in Milstein Dome presented student sculptural work from Mergold’s seminar, “Spolia: Special Topics in Technology,” a collaboration with the Departments of Classics and of Fiber Science & Apparel Design. The site-specific sculptures were created with fragments from broken plaster replicas of ancient statues (once owned by founding Cornell president Andrew Dickson White), with the help of various high-tech prototyping tools in the Rand Hall digital fabrication shops.

Aaron Goldweber is director of communications for the College of Architecture, Art and Planning.