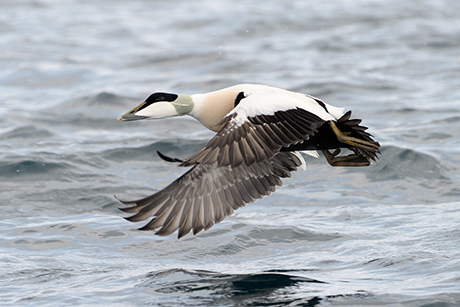 Provided
A common eider in flight.

Since 1998, hundreds and sometimes thousands of dead eider ducks have been washing up every year on Cape Cod’s beaches in late summer or early fall, but the reasons behind these cyclic die-offs have remained a mystery.

A team of scientists from Cornell, Tufts University, University of Georgia, the U.S. Geological Survey and the U.S. Fish and Wildlife Service (USFWS) have pinned down one of the agents responsible: a pathogen they’re calling Wellfleet Bay virus (WFBV). Their findings shed light on why eider ducks (also called common eiders) die on Cape Cod every year and offer hints about how the virus spreads.

Lead author Andrew Allison, a postdoctoral fellow at the Baker Institute for Animal Health in the College of Veterinary Medicine, identified and named the virus.  WFBV is a new orthomyxovirus, Allison said, which places it in the same family as influenza viruses. WFBV is most closely related to Cygnet River virus, another recently discovered virus known to infect ducks in Australia.

Although a small population of common eiders stays on Cape Cod year-round, most eiders seen on the Cape migrate from their summer breeding grounds in northern New England and Canada to overwinter in Cape Cod every fall. It’s not clear whether the dead birds are visitors, year-round residents or both.

Julie Ellis, a research assistant professor at Tufts’ Cummings School of Veterinary Medicine, is executive director of the Seabird Ecological Assessment Network (SEANET), the citizen-science organization that counted and collected dead eiders for the study. She says community members and visitors to the Cape often call SEANET to alert them when they encounter dead birds, but the eider deaths are particularly hard to miss.

“It’s pretty striking when you’re walking down a beautiful beach and suddenly you encounter 300 or so dead birds," says Ellis.

With the dead eiders supplied by SEANET and USDA Wildlife Services biologist Randy Mickley, Allison and his colleagues sampled various bird tissues and grew viruses present in the samples in cell culture. They then sequenced the genes of the viruses and compared the sequences with a database of viral genomes.

“We isolated the virus repeatedly, over multiple years of outbreaks, and in many birds, which tells us the virus is definitely playing a contributing role and possibly a major role in the die-offs,” Allison said. However, the dead and dying eiders found on Cape Cod have numerous health problems, he said, so it’s likely there are multiple factors to blame. “Lots of the birds are emaciated, and lots have parasitic worms in conjunction with the virus, and it’s possible another factor like stress or migration may also play a role and trigger the deaths,” he said.

Genes that encode proteins on the outside of WFBV hint at a mode of transmission, Allison said. “The surface protein of the virus suggests it might be tick-borne, that somehow the virus is transmitted among birds by ticks,” he said, because all other viruses with these types of proteins on their surfaces have been shown to be spread by ticks or other invertebrates.

According to co-author Chris Dwyer of the USFWS, fish and wildlife scientists see the health of common eiders as a barometer for the health of New England’s coastal and marine areas. He says identifying WFBV is “a major step forward in helping us understand what the cause of these mortality events might be, so we can develop a reasonable response if at all possible.”

Wesley Hochachka, assistant director of bird population studies at the Cornell Lab of Ornithology, reviewed the study but was not involved in the work. He says the common eider’s lifestyle might assist the spread of the virus. “These birds are colonial,” Hochachka said, meaning they gather in large groups during nesting season. “Colonialism lends itself to the efficient transmission of pathogens.”