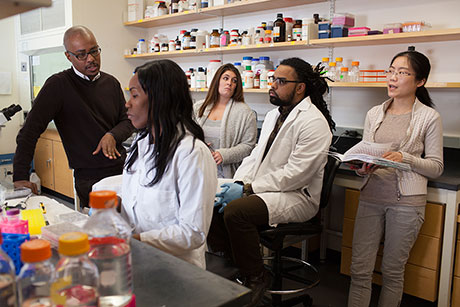 According to statistics, Cornell immunologist Avery August’s life journey has been an unlikely one. The son of a teenage mother from Belize who moved to the U.S. to give her children better opportunities, August grew up poor in tough neighborhoods of Los Angeles, only to work his way through graduate school at Weill Cornell Medical College in New York City and eventually into his current post as professor and chair of the Department of Microbiology and Immunology in the College of Veterinary Medicine.

August is also the 2014 recipient of the E.E. Just Lecture Award from the American Society for Cell Biology (ASCB), given annually to a minority scientist who has demonstrated outstanding scientific achievement.

Ernest Everett Just (1883-1941) was one of the first African-Americans to earn a doctorate in biology. He faced discrimination and struggled to secure an academic position, but still published more than 70 articles and two books. Award recipients are nominated by ASCB members but need not be members themselves.

“This is a really moving award for me,” said August. “It’s one of those things where you can never understand and appreciate the difficulty that E.E. Just faced as a biologist as a result of his race.”

August’s research revolves around trying to understand how the immune system reacts to – and the signals that lead to – allergic responses, including lung inflammation. In particular, he studies signals received by T-cells and mast cells. “If we understand them better, we can manipulate them” and develop therapies, August said.

He attributes his success in part to an early interest in science, even though as a young boy he had no idea that one could make a living as a scientist, he notes in a personal essay titled “People’s instinctive travels and the paths to science” he wrote for the ACSB’s journal Molecular Biology of the Cell.

“But the thing that drove me was the sacrifice that my mother made in coming to the U.S. to make a life for her children, and I really wanted to take advantage of the opportunity that she provided for us,” August said. “It would have been easy to do other things, but that kept me striving.”

Overall, August believes young minority students interested in science need various levels of support, from how to explain to their families their interest in academia when family members may not recognize this as a career path, to “social and emotional support of being in an environment where you are always a minority,” to guidance for minority undergraduates as they prepare for and once they attend graduate school, August said.

He also pointed to the importance of mentors, many of whom may not share the same background but can be very supportive and encouraging, as August found in his own career. When mentors do share a background with students, “it can provide the additional recognition of the type of support that underrepresented minorities need to be successful,” he said.

August received the E.E. Just Award in December at the ASCB annual meeting in Philadelphia, Pennsylvania.