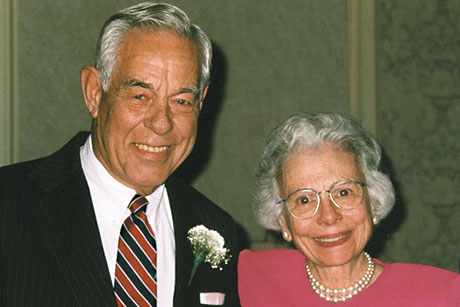 Henry “Hank” Bartels ’48, a presidential councillor and generous supporter of the university, died Jan. 16 at age 92.

Bartels also was a life member of the Cornell University Council and was honored as a Foremost Benefactor in 1987. He supported many Cornell programs, especially ones that directly benefitted undergraduates, through scholarships and endowed funds for engineering; student and academic services; athletics and physical education; the Cornell Lab of Ornithology; the Herbert F. Johnson Museum of Art; Cornell Plantations; Cornell’s Shoals Marine Laboratory; and the Cornell University Library.

With his wife, Nancy ’48, Bartels established the Henry E. and Nancy Horton Bartels World Affairs Fellowship in 1984 to bring international world leaders to campus to broaden undergraduates’ knowledge of world affairs. In 1999, he and Nancy made a $15 million gift to a campaign for Cornell athletics, and Bartels Hall was named in their honor.

Hank Bartels was “a very special person and a very special Cornellian,” said President Emeritus Frank H.T. Rhodes. “He really played an extraordinary role in the life and development of Cornell, and we mourn his passing, even as we celebrate a great life.”

Bartels also inspired others to reconnect, volunteer and give to Cornell; for example, the Bartels made their athletics campaign gift a challenge gift, matching any other gifts to name coaching positions. Twenty-one positions were named due to this match, with $30 million invested in program-specific endowments in athletics as a result.

Rhodes noted Bartels’ energy and enthusiasm, describing how he involved his whole family in supporting Cornell. “He picked up projects that other people would not,” Rhodes said, “and he was an active, thoughtful and positive presidential councillor.”

Bartels began his education at Rutgers University in 1941 and left in 1943 to become a naval aviator, flying bombers during World War II (every five years for 50 years, the Bartels have pledged a racing shell to Cornell rowing, with each shell honoring a fellow Class of ’48 veteran).

Bartels completed his degree in industrial engineering at Cornell in 1948. After a 37-year career in metalworking manufacturing, he retired as vice president of Insilco Corp. and president of an Insilco subsidiary.

Bartels was an avid windsurfer, supporter of Chi Psi fraternity and devoted to his community of New Haven, Connecticut; in addition to his involvement and support of many organizations in the area, he served on the board of governors of the University of New Haven for nearly 30 years.

He is survived by his wife, their two sons, Kenneth and Philip ’71, and four grandchildren, including Katie ’06 and Christopher ’09.