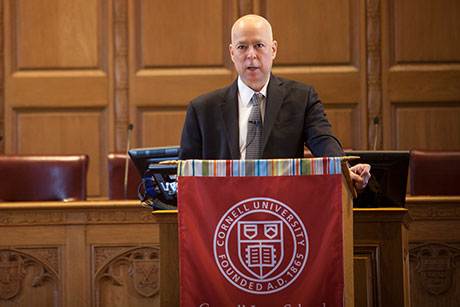 The terrorist attack on the office of Charlie Hebdo, a satirical magazine in Paris, sparked a heated debate on the freedom of speech around the world. In America, this new dialogue was a continuation of a much longer, equally passionate debate on the First Amendment rights, one that has been taking place in the Supreme Court.

Liptak began his talk with a 2011 Supreme Court case, Sorrell v. IMS Health Inc., which determined the legality of selling a doctor’s prescription information. The case was decided using the First Amendment, causing Justice Stephen Breyer to accuse the court of Lochnerism, a reference to the contentious 1905 Lochner v. New York decision based on the amendment. The Lochner case, Liptak explained, is often placed in the “anti-canon” of Supreme Court cases, along with other notorious decisions such as Dred Scott and Plessy v. Ferguson.

What made the Sorrell and Lochner cases so controversial, Liptak continued, is how the law was interpreted and applied. In Sorrell, prescription information was a form of speech, which could be protected, but it was also an economic activity, which could be regulated. A similar duality existed in Lochner. Reconciling this duality led to the controversy: The state legislatures tried to impose economic regulations and the contradicting court decision was dismissed as judicial activism.

Liptak mentioned another possible consideration in applying the law: If judging is, as he phrased it, “weighing competing interests” and “putting a thumb on the scale” in favor of marginalized speech, then should a deciding factor in applying the First Amendment be the relative power of the speaker? Though Liptak did not have an answer to this question, an audience member raised the possibility that a power-based consideration could lead to influential organizations, like major newspapers, being censored.

This brought Liptak to the dangers of applying the First Amendment liberally. “I practiced First Amendment law for 14 years, and I drank the Kool-Aid,” he said, describing his previous faith in the amendment. Over the years, many important decisions have been made using it, including allowing protestors near funerals and decriminalizing flag burning. However, he added, “There is something troubling we should think about: economic regulations being struck down on the basis of free speech.”

The Lochner era, which was characterized by such decisions, ended in the 1930s with the New Deal. To end our modern era of First Amendment law, Liptak suggested, a new New Deal is needed.

The lecture was presented by the Law School’s Frank Irvine Endowed Lecture Series.