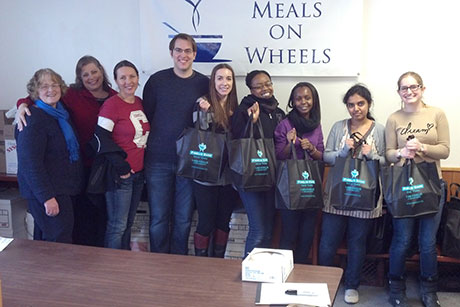 Provided
Members of The Cornell Club of Ithaca volunteer at Ithaca FoodNet Meals on Wheels as part of the Public Service Center's Cornell Cares Day. 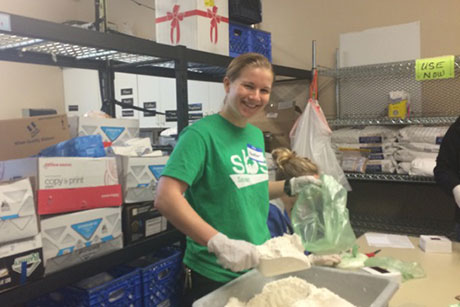 Provided
A volunteer at the Cornell Club of Minnesota's Cornell Cares Day event, held at Second Harvest Heartland of the Twin Cities, where students and alumni re-packaged bulk food for families.

Each January students and alumni work together on service projects in their hometowns while Cornell is on break. Hundreds of Cornell alumni and students at 37 sites across the country, as well as Thailand, participated Jan. 4-14 in the Public Service Center’s Cornell Cares Day.

The Cornell Club of Northern New Jersey held its Cornell Cares Day event at the Community Foodbank of New Jersey. They had 77 participants, including nine current Cornell students, sort food for two hours; in total they sorted 16 pallets of food that will go to the state’s food insecure. Attendees included future Cornellians, members of the Cornell Club of Central New Jersey and several multigenerational Cornell families, including event co-coordinator Susan Levy ’86 and her daughter, Dara Levy ’16.

“This event is always rewarding and memorable for the volunteers, with many returning to help year after year. It’s a meaningful way for the Cornell community to come together and make a difference,” Dara Levy said.

In Boston, 30 alumni and guests volunteered at the Greater Boston Food Bank in that city’s 15th annual Cornell Cares Day. The group, including Zuania Pomales Wood ’00, one of the event’s founders, contributed to sorting 9,232 pounds of food (7,385 pounds salvageable) for 6,154 meals.

• In Milwaukee, the Cornell Club of Wisconsin hosted a lunch and performed volunteer services for Kathy’s House, a “Hospital Hospitality House” for people in need of hospital care. They cleaned rooms; sorted, organized and prepared promotional material; and loaded furniture. Aside from hosting the lunch, the group also cooked the side dishes, prepared the fruit salad, and setup and broke down the event venue.

• The Cornell Club of Monmouth/Ocean Counties in New Jersey volunteered at the OASIS farm center, a vocational training facility for young adults with autism, in Middletown.

• The Cornell Alumni Club in Thailand volunteered at a mangrove forest conservation center. Approximately 60 participants, including 10 undergraduate students from the PSC’s Global Citizenship and Sustainability Initiative, a community-based research project in Thailand, along with students from Mahidol University, planted mangroves and learned about the region’s ecosystem.

• Fifty participants with the Cornell Club of Greater Philadelphia volunteered at the Philabundance Hunger Relief Center warehouse, the region’s largest hunger relief organization. The group sorted and quality checked more than 8 tons of food (breaking a Philabundance record) for families in need.

• The Cornell Club of the Greater Capital District (N.Y.) hosted an event at the Regional Food Bank of Northeastern New York. The group sorted and repacked more than 11,000 pounds of food in just two hours for distribution to food pantries.

• The Cornell Club of Houston, working with other volunteers, produced 5,400 meal packages (equivalent to 32,400 meals) in a little more than three hours.

• The Cornell Club of the Central Valley (California) hosted an event at FoodLink, a food distribution center for more than 87 outlets in Tulare County.

• The Cornell Club of Minnesota hosted an event at Second Harvest Heartland of the Twin Cities, where Cornell students and alumni repackaged bulk pasta and onions for families in Minnesota and western Wisconsin. In two hours, the whole shift repackaged more than 6,700 pounds of food; each volunteer helped feed 84 people.

• The Cornell Club of Sacramento (California) organized boxes at Habitat for Humanity ReStores.

• The Cornell Club of Western Washington worked at the Issaquah Food Bank, where 19 volunteers hauled crates from the freezer, bagged and labeled flour, moved eggs from dozen to half dozen cartons and cleaned the pickup office.