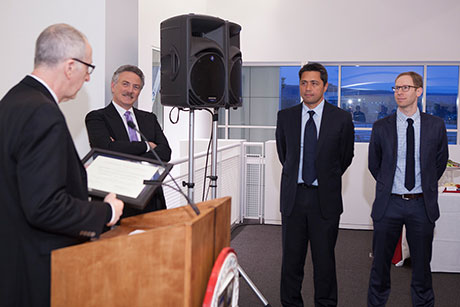 Bolstered by a $2.3 million venture capital investment, an agricultural technology startup is moving on from its first home in Cornell’s life sciences business incubator, a little more than a year after it arrived.

Agronomic Technology Corp., which makes the software Adapt-N to help farmers optimize nitrogen fertilization, is the first fledgling business to “graduate” from the three-year-old Kevin M. McGovern Family Center for Venture Development in the Life Sciences.

The occasion called for a celebration – a commencement of sorts – held Jan. 8 at the McGovern Center in Weill Hall, which included remarks by President David Skorton, company officials and others. Skorton noted that the McGovern Center, as well as the downtown Ithaca incubator Rev, reflect Cornell’s land-grant mission to benefit the public and, in this case, the economy of New York state.

Admitted as a McGovern client in December 2013, Agronomic Technology Corp. recently secured $2.3 million in capital investment from Cayuga Venture Partners, of which Cornell’s endowment is a limited partner; as well as Armory Square Ventures of Syracuse, New York, and Arthur Ventures of Fargo, North Dakota. The company is in the process of finding a permanent home as it seeks expansion, said co-founder and president Greg Levow ’04.

More than 10 years ago, Adapt-N originated in the lab of Harold Van Es, Cornell professor of soil and water management, who remains a scientific consultant for the company. In Van Es’ lab, Adapt-N was tested in thousands of farmers’ fields in several states, thanks to the support of federal and private grant funding. After licensing the product through the Cornell Center for Technology Enterprise and Commercialization, Van Es connected with Levow, Steve Sibulkin and Holly Trytten, who together co-founded Agronomic Technology.

Taking science out of the lab and into the marketplace involves many complex moving parts, noted McGovern Center Director Lou Walcer.

Established with a gift from Kevin McGovern ’70 and his family and funded through Cornell’s research division and its Institute of Biotechnology, the McGovern Center assists high-potential, early-stage Cornell life science companies. This includes providing mentorship, helping strengthen their business plans and advising them on obtaining investment.

Robert Buhrman, Cornell’s senior vice provost for research and vice president for technology transfer, intellectual property and research policy, offered his congratulations to Agronomic Technology, and noted how quickly the company got to the point of being ready to expand on its own – just what the McGovern Center is intended to support.